The University of Tennessee – Knoxville (UTK) held a ribbon cutting ceremony for the Native American Mound Garden situated on the University’s agricultural campus on Wednesday, June 15.  The focus of the garden is a 1400 year old Woodland Indian burial mound. 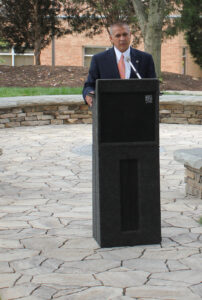 The UTK agricultural campus has grown up around the burial mound, though the mound has been threatened by construction several times in the past.  In the early 1980’s,  UTK staff members created a small pedestrian park around the mound with the idea that it would not only create a quiet, reflective setting for students; but that it would also help protect the mound area from construction damage.

Over the past year, University leaders planned a much more ambitious project for the area around the mound that would not only protect the mound, but would also serve to educate visitors about the Cherokees and their ancestors that built the mound so long ago.  Improvements to the Mound Garden include enhanced walking paths; built-in seating; native plantings; and interpretative signage detailing aspects of Cherokee history and culture associated with the region.

In attendance for the ribbon cutting from Cherokee were Principal Chief Michell Hicks, Tribal Historic Preservation Officer Russell Townsend, and Beloved Woman Myrtle Driver who provided the Blessing.
Chief Hicks stated “that there were many such places in the Southeast that were at one time Cherokee but were now controlled by some other people.”

He went on to say that “though many people want to capitalize on their relationship to the Cherokee, few went about it in the right way”.
Chief Hicks thanked the University of Tennessee for taking the time to work with the Tribe and making sure that UTK got it right.

Also in attendance at the event for UTK were both the current University of Tennessee President Dr. Joseph Dipietro, and former University of Tennessee President Dr. Jan Simek.  Dr. Simek, a noted archaeologist, was serving as UTK Chancellor when Chief Hicks started working closely with him to allow EBCI Tribal members to attend UTK at in-state tuition rates.
Dr. Simek credited Chief Hicks with creating the great relationship that the EBCI currently shares with UTK.  He went on to say that he believed that the mound garden would protect the mound in a very appropriate manner.
For his part, Dr. Dipietro pledged to continue the good working relationship that had been established between the EBCI and UTK.  Dr. Dipietro’s commitment to see the mound garden finished to such high standards speaks well to his commitment to this relationship.
– EBCI THPO