John Grant is an Air Force veteran and has been a police officer with the Bureau of Indian Affairs and a gaming host at Harrah’s Cherokee Casino & Hotel.  But, one thing the EBCI tribal member has always been is an artist. 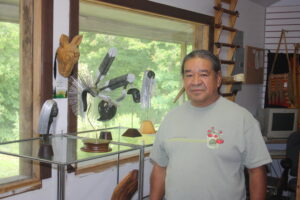 John Grant shows off some of his latest works utilizing a technique he developed using stone and wire. (SCOTT MCKIE B.P./One Feather photos)

Now a full-time artist, Grant has developed a new medium in stone carving where stainless steel wire and sodder wire are intertwined into his carvings.

“It was just a dream,” Grant said how he came up with the idea.  “I’d picked up wire here and there and have been looking at the concept of doing wire art.  It’s a medium that I have never seen.” 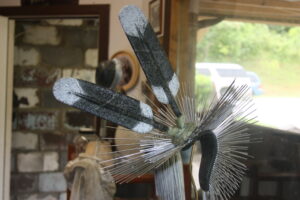 "When Lightning Struck Cherokee" is an homage to the pow wow dance champions from the Cherokee Indian Reservation.

He uses soapstone, pipestone and alabaster stone in his carvings which sometimes take him well over 100 hours each.

Grant lets each stone dictate what the finished product will be.  “The stone tells me what’s in there.  It’ll tell me, ‘I’m a fish or I’m a bear.’” 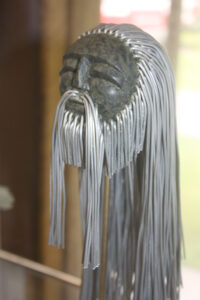 Grant hopes to hit the road for 2-3 months in the near future entering his work in various art shows across the country.  He doesn’t have an exact schedule yet, but like his carvings, the road and his path will come to him when it’s time.

One of his new works, entitled “When Porcupines Spoke to the People”, is on display at the Qualla Arts & Crafts Mutual, Inc. and some of his other works will be on display for the first time at the Cherokee Art Market scheduled for July 1-4 at the Cherokee Indian Fairgrounds.