Almost 10,000 Still Without Power in Area

Storms with high winds and lightning moved through the area the night of Wednesday, June 15 causing massive power outages throughout Jackson and Swain counties.  Many in the Cherokee area were without power on the morning of Thursday, June 16. 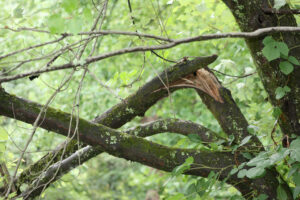 Snapped tree limbs and branches were abundant following a severe storm that blew through the area on the night of Wednesday, June 15. (SCOTT MCKIE B.P./One Feather photos)

According to Duke Energy, as of Friday morning, power has been restored to almost 8,000 homes in Jackson and Swain Counties who were without it since Wednesday night.  But, some are still without including 5,758 in Jackson County and 3,968 in Swain County.

Duke reported that almost 18,000 homes were without power in those two counties (Jackson 9,681 and Swain 7,791) on Thursday morning following the storm the night before.

“The damages are scattered,” said Betsy Conway, Duke Energy spokesperson, on Thursday morning.  “We did have crews working throughout the night and we have crews out assessing the damages this morning.” 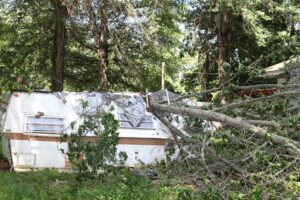 She said the crews are still in the assessment phase trying to get an accurate gauge on the full extent of damages.

“Crews will be working as quickly and safely as they can to restore power,” said Conway.

Several tribal programs and buildings were without power on Thursday morning.

Wachacha commented that there were no major injuries or fatalities that they were aware of.