Tour members visited various attractions in Cherokee including the Museum of the Cherokee Indian, the Oconaluftee Indian Village and the Qualla Arts & Crafts Mutual, Inc.

The Cherokee National Youth Choir performed a four-song impromptu concert Thursday morning in front of the Qualla Arts & Crafts Mutual.  All of the songs were sung in the Cherokee language.

The Youth Choir is scheduled to open the Unto These Hills drama tonight with a full performance. 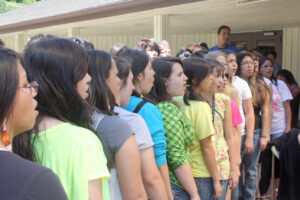 “This tour is about teaching the kids a cultural lesson on a west to east tour,” she said.

Molly Jarvis, vice president of Cultural Tourist at Cherokee Nation Entertainment, said in a statement, “This is a remarkable learning opportunity for tour group members and blog followers.  Cherokee Nation history will be presented geographically, musically and culturally along the Trail of Tears, which is a very somber period and has since defined the Cherokee Nation from east to west.”