The U.S. Department of Justice reports that 1 out of every 3 American Indian women will be raped in their lifetime and 75 percent will be physically assaulted.  Rashida Manjoo, United Nations Special Rapporteur on Violence Against Women, visited Cherokee in January specifically to gather information on the problem in Indian Country. 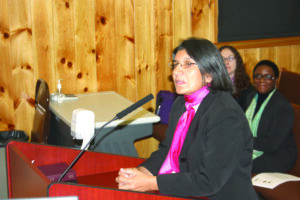 Manjoo visited the United States from Jan. 24 – Feb. 7 and gathered information throughout the country on the issue.  She released her official report on Tuesday, June 7.

Manjoo stated in her report that the Violence Against Women Act has helped to expand funding to help minority groups.  “Nevertheless, the Special Rapporteur did observe a lack of legally binding federal provisions providing substantive protection against or prevention of acts of violence against women.  This lack of substantive protective legislation, combined with inadequate implementation of some laws, policies and programs, has resulted in the continued prevalence of violence against women and the discriminatory treatment of victims, with a particularly detrimental impact on poor, minority and immigrant women.”

Caroline Bettinger-Lopez, professor and director of the Human Rights Clinic at the University of Miami School of Law, said in a statement, “The Special Rapporteur’s report underscores the need for the U.S. to bring human rights and women’s rights home.  When Congress reauthorizes the Violence Against Women Act (VAWA) later this year, it needs to contain robust provisions that create accountability for law enforcement officers who turn a blind eye to domestic violence victims and their children.”

Manjoo specifically mentioned the Eastern Band of Cherokee Indians several times in her report noting, “While visiting the Eastern Band of Cherokee Indians, the Special Rapporteur observed an example of the infrastructure that some tribal justice systems have developed to provide safety to women within their jurisdiction, including dedicated codes to address domestic violence.

Painttown Rep. Terri Henry is a long-time advocate on the issue and is the co-chair of the National Congress of American Indians (NCAI) Task Force on Violence Against Women.  “Violence against Native American women is at epidemic levels exceeding that of any other population in the United States and more than double that among all other American women,” she said.  “Yet, these victims and crimes lack the visibility to bring about badly needed changes in our laws and how they are enforced.”

Rep. Henry added, “I want to express my heartfelt gratitude to the EBCI, Cherokee Preservation Foundation, the Qualla Women’s Justice Alliance, Clan Star, and everyone who participated in Special Rapporteur Manjoo’s visit for supporting this important work.”

In her report, Manjoo listed five recommendations for helping curb the problem of violence against Native American women including:

1. Prioritize public safety on Indian land by fully implementing and funding the Violence against Women and Tribal Law and Order Acts.

2. Assist tribal authorities in their efforts to respond to violence against women by allowing tribal law enforcement officials access to federal criminal databases and establishing a national reporting system to investigate and prosecute cases of missing and murdered Native American women.

3. Establish federal and state accountability for the investigation and prosecution of violent crimes against Native American women.

5. Consider restoring tribal authority to enforce tribal law over all perpetrators, both native and non-native.

Report of the Special Rapporteur on Violence Against Women