Air, Ollie, Grind, and Fakie are just a few of the many skateboard terms that’ll be used frequently at the new Cherokee Action Sports Park, located across from Bradley’s Campground on Acquoni Road in the Yellowhill Community,  which officially opened on Friday, June 10. 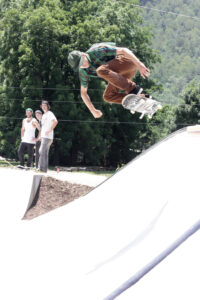 Eric Hunt, from the Push Skate Shop in Asheville, gets air off a ramp at the new Cherokee Action Sports Park during opening day on Friday, June 10. (SCOTT MCKIE B.P./One Feather photos)

“I love it,” said local skater Austin Davis who was at the opening day festivities.  He said the new park is “way better” than the one they’ve been using across from the Yellowhill Community Building.

Thinking of his fellow skaters, Davis said the ramps at the old park should be donated to the one in Bryson City.  “The one down in Bryson doesn’t have that many ramps,” he said.  “And, I think if they got those down there it’d make it a whole lot better.

“Everybody says it’s one of the better ones in western North Carolina,” said local skater Dennis Burgess who is excited at having such a facility in his hometown.  “It’s a lot better than going to Atlanta every weekend.”

The Park, set on a 3.5 acre tract, is around 12,000 square feet and features both street and bowl or transition skating elements.  Last year, Principal Chief Michell Hicks submitted a resolution, which was unanimously approved by Tribal Council, to fund the Park for $600,000. 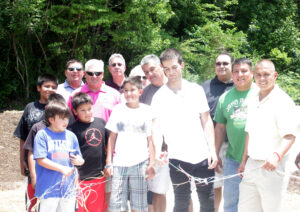 “How did we do?” Chief Hicks asked to great applause as he came to the podium during Friday’s opening.  “This is something we should be excited about!  We finished this project in nine months.”

“There’s a lot of good things happening in Cherokee today, but it takes time and it takes patience.  But, it also takes resources to get there and the vision.  Give this Council a big hand for stepping up, in nine months time, and making this happen.”

Yellowhill Rep. David Wolfe said, “This is a lot better than the old one down here so I want to challenge everyone to take care of it and take ownership of it.  Ownership doesn’t mean tagging it or anything like that so just take ownership and…safe landing.”

Vice Chief Larry Blythe commented, “It’s a pleasure to see the planning come together on a project like this.”

“We looked at projects like this in Tacoma (Wash.) and Seattle and said, ‘why can’t we do something like that here?’  So, here it is and I think it’s going to be a great addition for the community and a great addition that we can market to our traveling public.”

John Jenkins, from Stewart Engineering in Raleigh, the lead consultant on the project, thanked Danny Childers and his team from Cherokee Enterprises, the lead contractor on the project, as well as Brad Siedlecki, with Pillar Skate Designs of Tempe, Ariz., who designed the park.

“In my opinion, from all that I’ve watched and learned,” said Jenkins, “this is going to be the best one (in the state) and one of the best in the southeast and we’re excited about that.”

Chief Hicks commented that he would like to see a flat area made for younger skaters to learn on.  When built, Jenkins related the extra space would put the Cherokee Action Sports Park over the square footage of the skate park in Raleigh making it the biggest in the state.

For more photos of the opening day: