189 Come out to Support Event

EBCI tribal member Brandi Cooper has a rare bone marrow disease.  Doctors have been unable to determine which of three diseases she has (Aplastic anemia, Paroxysmal Nocturnal Hemoglobinuria [PNH], or myelodisplacia), but one thing they are sure of is that a bone marrow transplant would cure her…that much is certain. 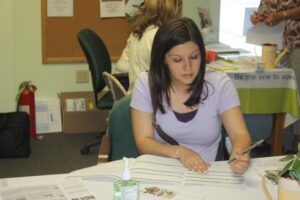 So, members of the EBCI Health & Medical Division organized a blood marrow donor drive in Cherokee.  The drive, which was held at three separate locations, drew a total of 189 people interested in helping Brandi and signing up for the National Bone Marrow Registry.

“The bone marrow drive went well,” said Brandi.  “There were many volunteers from the community and the event went smoothly.  I am proud of those that donated their time, energy and efforts to this great cause.”

Brandi Cooper (center), with husband Cameron and daughter Annasette, has a rare bone marrow disease that a bone marrow transplant will cure.

“I am also thankful to those who were willing to be placed on the registry in my honor.  I truly hope this helps our community and will continue to encourage others to join the registry.  A special thanks goes out to the following people/programs:  Aneva Hagberg, Radonna Crowe, Keahana Lambert-Sluder, Rosie McCoy, Healthy Cherokee staff, Fire Dept. staff and community volunteers.”

Brandi related that it generally takes about three to six months for those participating in a drive to be added to the registry so the news of a possible match could be a little ways off yet.

McCoy was a volunteer at the main site, the Cherokee Fire Department conference room, and commented, “It was encouraging to see people turn out and want to help with this cause.  There were some people that came by to check their eligibility who were dealing with their own health problems, and it was very touching that they wanted to be a part of and even assist though they had it rough themselves.  I’m looking forward to helping with the next bone marrow register.  It’s important that all people get registered, no matter what ethnicity you are.”

The National Marrow Donor Program (NMDP) states that bone marrow donor matches usually occur within ethnic groups.  According to figures from the organization, American Indian/Alaska Native donors accounted for 1.1 percent of the total donations as of January 2009.

McCoy commented, “Some people expressed fear, ‘what if I am a match?  I’ve heard it’s a painful procedure.’  Well, I look at it like this:  What if it were your child or your parent?  Imagine the heartbreak and pain some families endure because a match was not located, or their loved one is waiting on that special match.  I would gladly be uncomfortable for a brief period of time if it helped save someone else’s life, no matter who they were.”

To learn about the entire process of bone marrow donation, visit BeTheMatch.org or call 1-800-MARROW-2.