Two teen cousins, both EBCI tribal members, testified at an Environmental Protection Agency (EPA) hearing in Atlanta, Ga. on Thursday, May 26 on the effects of mercury and other toxic emissions from coal power plants.  The EPA has proposed more protective standards for these toxic chemicals and the hearing in Atlanta was the third and final opportunity for citizens to provide oral comments on the proposed mercury/air toxics rules. 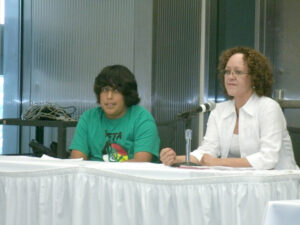 Simon Montelongo (left) right after testifying to the EPA, reacting to the testimony of a coal industry representative. (Photo courtesy of Elizabeth Crowe)

Simon Montelongo, 13, of the Yellowhill community, said in his statement, “I grew up fishing with my grandfather in the Oconaluftee River. One day, I asked my mother if she would take me to Fontana Lake because I really love to fish, and she told me that I couldn’t because of the high mercury content in the lake.”

“I would like to have clean water everywhere I go so I could try different kinds of fish without mercury and other toxic chemicals. I want the EPA to protect the health of my family and my people by telling companies to stop releasing harmful chemicals from power plants,” Montelongo said.

Mercury is a highly toxic chemical that is released into the environment from coal power plants and other industrial facilities.  When it settles in watersheds it is taken in by fish, bioaccumulates and travels through the food chain to humans.  Mercury exposure, like lead and other heavy metals, is linked to devastating learning and developmental disabilities and other chronic health disorders.  Mercury can even cross the placenta of a pregnant woman and affect an unborn child.

The EPA’s rule would also reduce emissions of arsenic, chromium, nickel and acid gases like hydrogen chloride and hydrogen fluoride the latter two are suspected as causing cancer.

Hannah Crowe, age 14, whose extended family is also from Yellowhill, submitted written testimony to the EPA.  “I want what is best for everyone in my town, my state, and my country: To keep health up and death down. And when the EPA has the power to save lives, I hope that they’ll make the right choice.”

The EPA estimates that the proposed rule would improve public health by avoiding illnesses.  For example by 2016 the rule would help avoid up to 17,000 premature deaths, 4,500 cases of chronic bronchitis, 11,000 non-fatal heart attacks, 120,000 cases of aggravated asthma, 12,200 emergency room and hospital visits.  These avoided health problems will save roughly $14 for every $1 spent to comply with the rule, such as with better pollution control technologies for power plants.

The EPA is accepting written comments on the proposed mercury and air toxic standards through July 5.  Information on the proposed standards can be found at http;//www.regulations.gov.  Written comments may be submitted to EPA by email at a-and-rDocket@epa.org, or b postal mail to Air and Radiation Docket and Information Center, Environmental Protection Agency, Mail Code:: 2822T, 1200 Pennsylvania Ave NW, Washington DC 20460.

Elizabeth is the director of the Kentucky Environmental Foundation.