Arneach to kick off Summer Program at Jackson County Library

Legendary Cherokee storyteller Lloyd Arneach is bringing his repertoire of stories and legends to the Jackson County Public Library Complex. The program is scheduled for Monday, June 20, 7 p.m., and will be held in the Community Room in the former courthouse. The Lloyd Arneach storytelling event will be the first program of the summer season and the content is appropriate for all ages. 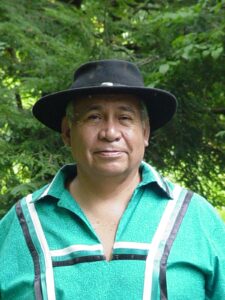 A native of Cherokee and an EBCI tribal member, Arneach is renowned for entertaining audiences by interspersing humor with his tales and stories. His informative and moving stories educate listeners about Cherokee culture and tradition. Known for his rich, smooth voice, Arneach compels his audiences to become part of the stories as he weaves the web of details.

From 1970 – 1980, Arneach traveled throughout the state of Georgia lecturing on Cherokee history and culture, while working as a computer programmer for a large corporation in Atlanta. Arneach’s storytelling career began by accident. He gave a talk to a group of people because his babysitter needed a Girl Scout (Indian lore) badge. He was so successful that he was asked to perform in front of other groups. He then added storytelling to his presentations on culture and history, and in 1993 began a full-time career as both a storyteller and historian.

His stories cover a broad range from the old stories of the Cherokee to contemporary stories he has collected. He learned his first legends from two storytelling uncles on the reservation. Many of his stories are light-hearted traditional tales highlighting the Cherokee reverence for nature.

This storyteller says he refines his programs after seeing the reactions of the audience. He tells that the Cherokee language is not a foreign one, but was spoken in this area long before the English, Scots and Irish arrived. He refers to it as “Early American.”