Question, Persuade, Refer (QPR) teaches lay and professional persons to recognize and respond positively to someone exhibiting suicide warning signs and behaviors. Trainers are licensed to certify people in QPR for the next three years. Groups can be trained and certified in a one-hour training. 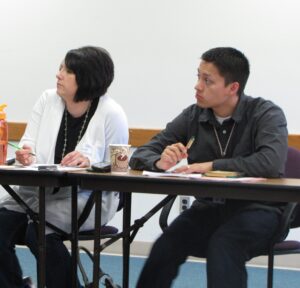 About 30,000 people die by suicide in the U.S. each year. Suicide ranked as the eighth leading cause of death for American Indians/Alaska Natives of all ages and ranked as the second leading cause of death for those from age of 10 to 34.    According to the Suicide Prevention Resource Center, American Indian/Alaska Native youth have more serious problems with mental health disorders related to suicide, such as anxiety, substance abuse, and depression than any other ethnic group.

Over the past 14 months, efforts have been made toward the development of a center of excellence for suicide prevention in Cherokee health care facilities. This is a community effort made through Cherokee Indian Hospital partnering with community gatekeepers including the Health and Medical Division, tribal emergency services, and the Cherokee school system. This effort is supported through the Methamphetamine and Suicide Prevention Initiative (MSPI).

A goal in the first year of the Suicide Prevention Initiative in Cherokee was to improve the chain of care response regarding suicide prevention. Some of the recent accomplishments have included the establishment of telepsychiatry services and the completion of a Safe Room within Cherokee Indian Hospital emergency department. A current objective is to train health care staff as well as community members on how to respond to suicide risk.

Expect to see these trainers talking about suicide prevention in your community, school and workplace over the next three years. Please contact Stephen Colmant if you have a specific request for suicide prevention training for your group at 554-6559 or stepcolm@nc-cherokee.com.

Colmant works for the Analenisgi program, part of the EBCI Health & Medical Division.