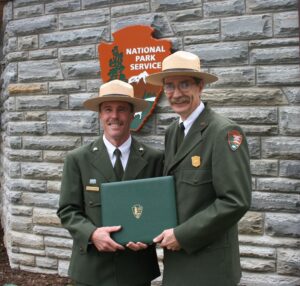 On April 14, Park Superintendent Dale Ditmanson presented the award to FitzGerald in recognition of his extraordinary performance of duties over the span of his 33-year National Park Service (NPS) career and for his outstanding leadership that resulted in exceptional achievements at Great Smoky Mountains National Park.

As second in command at Great Smoky Mountains National Park for the past 5 years, FitzGerald has demonstrated his commitment to public service and excellence in management and has many marked achievements in addition to his complex oversight of Park operations.  One major accomplishment was spearheading a comprehensive $80 million facility rehabilitation program in response to the passage of the American Recovery and Reinvestment Act of 2009 (ARRA).   Under extreme time constraints, he established a project team to review and prioritize eligible Park projects and then worked collaboratively to streamline the required compliance, scoping, and design work to begin the numerous construction projects.

Due to his guidance and keen organizational and managerial skills, major improvements to the Park’s infrastructure were accomplished on a large scale which also included integrating accessible amenities to many of the restoration projects.

At the same time as the ongoing ARRA projects, FitzGerald crafted a partnership agreement with Great Smoky Mountains Association, the Park’s cooperating association that fully funded the construction of the new Oconaluftee Visitor Center.  This project, which began during the Park’s 75th Anniversary celebration in 2009, required establishing new criteria in a formal Partnership Construction Agreement and coordinating an extensive internal approval process to allow construction by a park partner while ensuring the interests of the federal government.  He also provided overall direction of the project over a 20-month period.

In addition, the citation also stated that the Park’s 75th anniversary year-long celebration resulted in many successful events and positive outcomes as a direct result of Kevin’s involvement.

Over his career, FitzGerald served as Chief Ranger in multiple NPS units as well as at the regional and national levels.  He has been responsible for a full range of visitor and resource protection activities that also included wildland and structural fire, wilderness stewardship, minerals/oil and gas regulations, aviation activities, and special park uses.  His acting assignment as Chief Ranger at NPS Headquarters in Washington, D.C., during a critical restructuring period in the visitor and resource protection responsibilities, produced significant changes and reshaped policies dealing with varied law enforcement, security, and emergency services that are carried out today.

The citation stated that, “Throughout the years, Kevin has demonstrated a high degree of ingenuity and created workable solutions to address issues and concerns impacting the NPS.  His practical and logical thinking, thoroughness to detail and decisive abilities have led others in the NPS to call upon him to assist in developing more effective park management strategies within their areas.”  He has guided development of programs with government-wide impacts such as the National Emergency Preparedness program, Homeland Security, and standardization of Special Event and All Risk Incident Management Teams.