It was once a dairy farm.  It also once housed a craft business known as The Cherokees for years.  Soon, it will be the new transportation hub for the Eastern Band of Cherokee Indians.

Ground was broken on a new building on Thursday, April 21 that will house EBCI Transit as well as the Cherokee Department of Transportation.  The 10,000 square foot building, which will be located in the field adjacent to the Cherokee Boys Club, was designed by Padgett and Freeman Architects. 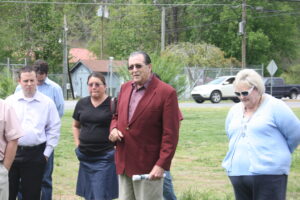 Ray Kinsland (2nd from right), past Cherokee Boys Club general manager, gives a brief history of the site where the building is to be located.

“This is going to be a great location for a centralized transit.”

Vice Chief Larry Blythe said the site has changed with the times as the priorities of the Tribe have changed over time.  “What do the people need?  What does our community need?  Opportunities in transit are now greater than ever.  Even in tough economic times, we are looking ahead and prioritizing.”

He said this project is truly a joint effort of Tribal Council, EBCI Executive and the community.

Scott Donald, Padgett and Freeman project manager, said his company appreciates its relationship with the Tribe.  He said the facility will be very low maintenance.  “It’s a great building.”

Ray Kinsland, past Cherokee Boys Club general manager, related, “I remember when it was a dairy farm.”  He provided a brief history of the site telling the crowd that the dairy farm served the Cherokee Indian Boarding School for many years.

Kinsland said the cooperation shown on the project is palpable.  “We’re all here for the same reason.  There’s no you and us.  We’re all us.”

See below for a rendering of the project: