An event was held Wednesday, April 20 that was officially called the Ray Kinsland Retirement Luncheon, but the focus of the event was the announcement of two sizeable donations that will help generations of Cherokee students. 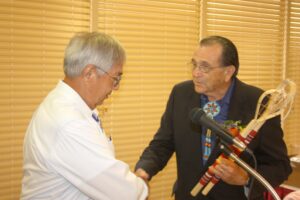 Paul presents Kinsland with a pair of fully beaded Cherokee ballsticks he made.

“It’s fitting that great leadership is synonomis with Ray,” said former Principal Chief Joyce Dugan who currently serves as Cherokee Central Schools Director of Education.  “He would never take a compliment for himself.”

“The best leaders lead by empowering others,” she said.  “And yes, Ray has done that.  I don’t ever recall Ray asking for anything for himself, only for others.”

Principal Chief Michell Hicks said Kinsland has been an inspiration to him since childhood.  “I don’t think anyone has had more of an impact on my life.  The foundation that you bring to this Tribe is a value system that I’ve grown to truly appreciate over the years.”

Vice Chief Blythe recalled when he was first elected to public office as the representative for the Painttown Community.  “The first man that called me was Ray who called to congratulate me, and I asked him, ‘what do I do now?’  Ray, at that time, said, ‘pray about it.’”

“I truly appreciate this man,” he said.  “I appreciate his friendship and what he has done for this Tribe and this community.” 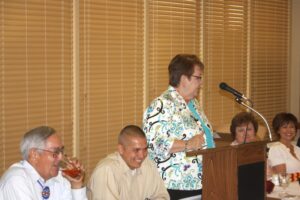 Joyce Dugan, former Principal Chief and Cherokee Central Schools director of education, gets a laugh from the crowd with a funny story about Kinsland.

Wilbur Paul, Cherokee Boys Club board president, presented Kinsland with a set of Cherokee ballsticks that he fully beaded.  “It’s been an honor for me to work with Ray.  He’s been a friend, a mentor and a leader.”

Tommy Lambert, Cherokee Boy Club general manager, summed up the feeling of many at the Boys Club and throughout the Tribe, “Ray is a great teacher.  He empowers his employees to learn.”