On April 19, 2004, the Cherokee Language Immersion school opened with one classroom and seven students.  It was housed in the Dora Reed Childcare Center. 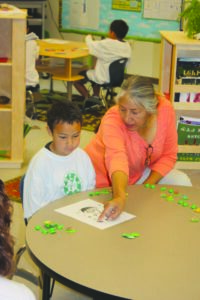 Now, seven years later, the school – now named the New Kituwah Academy – has 58 students ranging in age from 8 ½ months to 7 years.  The school celebrated that 7-year anniversary with an open house on Tuesday, April 19.

And, the program is expanding even further.  In the fall, it is hoped that a 2nd grade classroom will open and future plans call for the school to serve students through middle school. 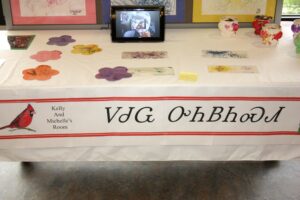 Each classroom had a display table for the open house.

“What makes me most proud of what we’ve accomplished here is we started with one classroom, we built a classroom for the past seven years and now we’re at the point to where we have an actual academy,” said Principal Chief Michell Hicks who was in attendance at Tuesday’s open house.  “As you look at and listen to the students, there’s no question that we’ve made the perfect decision here as it relates to the future of the tribe.”

Walker related that the new Board of Trustees is made up of the following individuals:  Sammi Saunooke, Shirley Oswalt, Abraham Wachacha, Richard Sneed Jr., and Marsha Jackson.

Garfield Long is a fluent Cherokee speaker and works at Kituwah Academy officially as a linguist and translator but often is a jack-of-all- trades going where he is needed.

He related that each classroom has a fluent Cherokee speaker paired with one or more Language Assistants who are second-language learners.

Elementary teachers at the school are certified and the five pre-K classrooms are designated as Early Childhood Education programs.  The school itself carries a 4-star license with the N.C. Division of Child Development – a designation it has achieved and maintained from the start.

Walker said that expansion is needed.  “We have waiting lists for every age group.”

And, those waiting lists are not on a first-come, first-serve basis.  Each student and their family are selected based on a stringent application and interview process to ensure that the curriculum will be followed at home as well as in school.  Parents who are not fluent in the language themselves are required to take classes so that the students hear the language spoken in the home as well as in the classroom.

For more photos from this event, visit: