Ball to be honored by FBI-LEEDA, encourages Tribal Members

Gerard Ball would love to see enrolled members of the EBCI who have “the spark to be leaders” and are undergraduate students apply for the Jones-Bowman Leadership Award program before its May 6 deadline.  They could be in their teens, twenties or older like him. 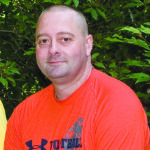 Three years ago, Ball, who was then 35 years old and Sergeant Detective with the Cherokee Police Department, says he decided that if he was going to truly be a leader and tell others that education was important, he had to walk the talk.  He had enrolled in college after high school, but hadn’t stayed long.

But the last three years have been a different story.  He has earned an associate’s degree in criminal justice at Southwestern Community College, a bachelor’s degree in criminal justice at Western Carolina University and a master’s degree in Strategic Leadership at the University of Memphis, taking full advantage of the university’s online program.  He has also become Chief Agent of the new Cherokee Alcohol Law Enforcement Division.  And he’s been a Fellow in the Jones-Bowman Leadership Award program for all three years, using monies awarded to him to design an individual leadership development plan that has opened so many doors for him and has helped him see that his legacy as a leader depends on his willingness to help prepare others to be leaders.

On April 20, Ball is being honored by the FBI-LEEDA (Law Enforcement Executive Development Association) with its Trilogy Award for having completed three in-depth development programs the professional organization offers law enforcement officers (the Command Institute for Law Enforcement Executives, the Supervisor Leadership Institute, and Executive Survival, a program about the challenges of policing in the 21st Century).  Ball is the eighth law enforcement officer ever to have completed the trio of programs, and he’s been able to undertake them because of the Jones Bowman Award.

Jones-Bowman Leadership Awards are made each year to undergraduate students who are enrolled members of the Eastern Band of Cherokee Indians and have leadership potential they are committed to developing through a year-long fellowship.

The Jones-Bowman Leadership Award was established in 2007 to honor the memories and leadership of Principal Chief Leon Jones and Mr. James Bowman, founding members of the Board of Directors of the Cherokee Preservation Foundation.

An important part of the Jones-Bowman program is that it gives Fellows opportunities to provide service to the community.  Ball and other Fellows are currently assembling sustainable rain barrel systems for 30 tribal elders.

Ball also has worked hard to bring law enforcement events to Cherokee so that visitors spend money in the community.  Last year he helped bring the regional golf tournament of the North Carolina Association of Chiefs of Police Association (NCACP) to the Sequoyah National Golf Course, and $1760.82 of the proceeds were presented to the Jones-Bowman program to help fund future fellowships.  The same tournament will be held this year at the course on August 27, and Ball expects to present a bigger check to the Jones-Bowman program now that signage and other one-time expenses have been paid.  “The community has really stepped up to support these events,” he said.

Ball recently submitted a winning bid that will bring the 2012 NCACP Winter Conference to Cherokee and more than 400 people are expected to attend in January 2012.  He says he might not have been involved in bringing any of these events to Cherokee were it not for the Jones-Bowman Program and the contacts he has made through his leadership development activities.

“The Jones-Bowman Program goes above and beyond the typical scholarship,” said Ball.  “It allows students to really dive into what they are interested in and attend conferences or take advantage of other opportunities where they can get hands-on, real world experiences.  They can also meet people in the field they are working in or want to work in who are great mentors.”

Ball thanks Carmaleta Monteith and Tom Belt, who served as Jones-Bowman mentors to him, and Alicia Jacobs and other Cherokee Preservation Foundation staff members who have provided assistance whenever he has called.  He also thanks Karen, his wife, and daughters Abbie and Skylar for the support they’ve given him that have helped him stay motivated during a challenging three years.

Not that his life is going to be any quieter.  For one thing, Ball is not going away from the Jones-Bowman program.  He is going to become a mentor to undergraduates who decide to take advantage of the program and all that it offers. “I want quality applicants to come forward and apply,” he said.

For complete information about the Jones-Bowman program, including how to apply, visit www.cpfdn.org/jonesbowman.html or call Alicia Jacobs at 828/497-5550.