Cherokee elder Jerry Wolfe smudged the site last June at a groundbreaking ceremony.  Now, the most visited national park in the country has a new visitor center at one end.  The Oconaluftee Visitor Center in the Great Smoky Mountains National Park, located just a mile from Cherokee, was officially opened during a ceremony held Friday, April 15. 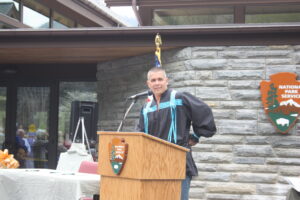 The GSMA funded the center to the tune of around $3 million.  Maddox, GSMA executive director, told the crowd at Friday’s event, “It’s a beautiful day in the Smokies.  Boy, what a special day.  We have some wonderful people that made this happen.”

He thanked Citizens National Bank in Sevierville for providing the loan to the GSMA which made the center possible.  “This was a challenging project, but boy it was worth all the sweat, tears and anxiety to get this put together.  Told within the walls of this facility is the story of the people of the Smoky Mountains.” 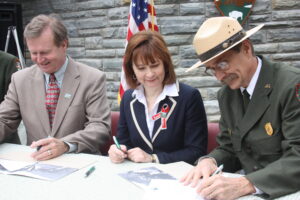 Maddox related the entire project was done with the environment in mind.  “We tried to make them (buildings) as efficient as possible.”

Some of the green aspects of the buildings include:  a roof made from recycled rubber which has a life span of fifty years, gutters that will take rain water to a 6,500 gallon water tank which will use the water collected to flush the toilets in the facilities, flooring made from a combination of recycled and reclaimed products, carpeting made from recycled carpet floor, and the use of solar tube lighting throughout.

Principal Chief Michell Hicks praised the green efforts of the project.  “It’s great to see that the Park is finally going green.  I think that we’ve definitely set the stage here in western North Carolina.”

Chief Hicks spoke proudly of the relationship between the Eastern Band of Cherokee Indians and the Park.  He said it is great to know that there is another place in the area that will highlight mountain and Cherokee culture in a positive way.

“It makes me proud that we can play a small part in this.”

In a display of that relationship, the event was opened by the posting of the colors by the Steve Youngdeer American Legion Post 143 Color Guard from Cherokee.  Miss Cherokee Tonya Carroll led the crowd in the Pledge of Allegiance with the assistance of Teen Miss Cherokee Andrea Cedillo, Junior Miss Cherokee Kaley Locust and Little Miss Cherokee Aliyah Bigmeat.

Barbara Muhlbeier, GSMA board chair, said the construction of the 6,300 square foot visitor center is “a symbol of partnership” between the Park and the GSMA.

“This building is a product of that partnership for 58 years,” she said.  “It has been a total joint effort in relying on each other in a relationship that is irreplaceable.”

Muhlbeier related this is the largest product ever undertaken by the GSMA.

For more photos of this event: