Blue silhouettes lined the path at a walk held on Thursday, April 14.  Each of the silhouettes featured a statistic about sexual assault.  All were disturbing…one was chilling. 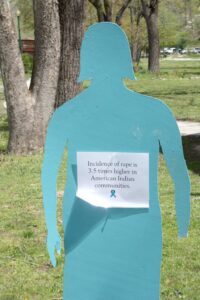 “Incidence of rape is 3.5 times higher in American Indian communities,” read the last sign in the walk.

The walk, held in conjunction with Sexual Assault Awareness Month, was sponsored by the EBCI Domestic Violence/Sexual Assault Program in an effort to shed light on the reasons and possible solutions to the problem.

“It’s sad that we live in a world where we have to teach our daughters, ‘hold your keys like a weapon,’” said Tom Hill with the Analenisgi program.

Hill spoke to the group and stressed the importance of talking about the situation openly.

“Healing makes us stronger than we were before,” he said. 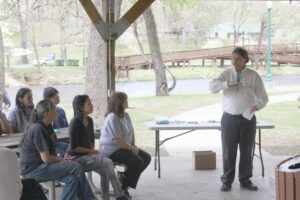 Tom Hill, of the Analenisgi program, spoke to the group about the importance of talking about the situation openly.

He related that victims of sexual assault need to validate the trauma and allow time to heal.  “We need to find a balance with the physical, spiritual and emotional self.”

While some males are victims of sexual assault, it is overwhelmingly a crime against females.  “Men, we are the reason this problem exists,” said Hill.  “As men, we need to take a stand.  We are the ones that will end violence and sexual assault against women.”

Kim Wright has been a nurse for 13 years and has worked at Cherokee Indian Hospital since 2005.  Since 2007, she has served as a SANE (Sexual Assault Nurse Examiner) Nurse.

“We have a lot of cases in this area,” she said, “a lot more than we should.”

Wright related to the group that since 2007, there have been 270 sexual assault cases in the Cherokee community.  She said that all pediatric cases in Cherokee are referred to Asheville, and there have been 110 of those this past year alone.

“Only 30 percent of rape victims even report it,” said Wright.

Gary Ledford, EBCI Public Safety director, commented, “Us being in a job is a realization that we have serious problems.  At some point and time, it became acceptable for our women and children to be assaulted.”

“We have to be proactive and change the mindset.”

Ledford also said that there needs to be a zero dismissal and zero tolerance when it comes to the prosecution of sexual assaults.  “If you’re going to do something wrong, you need to be punished.”

Some statistics contained on more of the silhouettes include:

For more photos of the event, visit: