By DAWN ARNEACH
ONE FEATHER CONTRIBUTOR 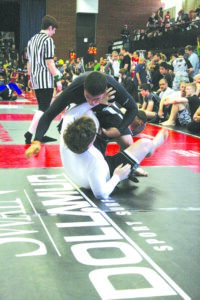 French takes down Mitch Bullins in the Teen No-Gi division on Saturday. In addition to his first place finish in No-Gi, he won a Silver Medal in the Gi Teen Division.

French won his first match in No-Gi by executing an arm triangle choke.  He won his second match just seconds into the contest with a guillotine choke.

He won his first Gi match by scoring six points.  He lost his second match on points and ended up with the silver medal in the division.

French has been training in mixed martial arts with Clyde Dull at the Birdtown Recreation Center for over a year.  He just recently started training in Brazilian Jiu-Jitsu at the Basulto Academy of Defense in Waynesville.  This was only his second grappling tournament.

“I want Landon to move up to the men’s division,” said Armando Basulto, his jiu-jitsu instructor.  “He’s a natural.”

Dull commented, “He is also a good striker and I am looking forward to seeing Landon fight in the cage when he is old enough.”