By SCOTT MCKIE B.P., ONE FEATHER STAFF and

Five EBCI tribal members will retrace the Trail of Tears this summer as they participate in the Remember the Removal bicycle ride.  The ride is scheduled to start at the New Echota site in Georgia around June 8 and will end 22 days later in Tahlequah, Okla. 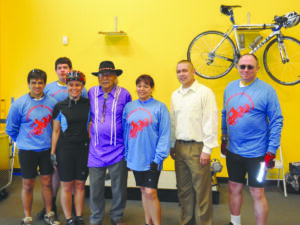 The 950-mile ride will take the cyclists on the northern route of the Trail of Tears from Georgia through Tennessee, Kentucky, Illinois, Missouri, Arkansas and ending in Oklahoma.  The ride will include Rattlesnake Springs where the Cherokee were kept in a large concentration camp awaiting removal.

The ride, organized by the Cherokee Nation, will include EBCI participants for the first time this year.  The five riders chosen from Cherokee include:  Sheena Kanott, Tara McCoy, Casey Cooper, Blaine Parker and Hugh Lambert.

“The instant I heard of the ride, even before I knew anyone might be invited to participate, I had an immediate desire to go,” said Lambert.  “It was an instant knowledge that this was a very important event in my life.  I knew instantly it was something I wanted to, no, perhaps something I needed to do.”

“I can barely express my gratitude for having the honor of being allowed to make this journey,” he commented.  “I feel so honored and blessed.  I would not be here today if not for the love and care of my family, friends and community.  By the way, my co-workers are included in this list as family.”

Lambert said the ride will be a test for him and a confirmation of taking control of his own health.  The 54-year-old personifies the word “survivor” having overcome a brain tumor, diabetes, high blood pressure and high cholesterol.

Principal Chief Michell Hicks commented, “It is an honor to be invited to participate in this event by our relatives at the Cherokee Nation.  Our riders will have an opportunity to reunite our people through this event.”

The EBCI cyclists are working with Carmichael Training for long distance riding as well as Bryson City Bicycles and Motion Makers for their bicycles and training gear.  The Cherokee Choices program is providing support for the ride and the North Carolina Trail of Tears Association will be sponsoring a send-off event from Cherokee in June.

Tara McCoy works with the Cherokee Choices program and is excited to be a part of the ride.  “This ride is an honor to our ancestors  – the ones who had to walk, the ones who had to stay, the ones who died along the way and the ones who survived the walk.  To me, sometimes we have to lose in order to win.  Our people have lost a lot, but we are still here – we are still thriving strong.  I would like to instill that passion for survival to my children and to our generations yet to come.”

She said the ride will be a test – physically, mentally and emotionally – for her, but it’s something that she is ready to do.  “I know it is going to be difficult, but I am proud to represent the EBCI and will do my best.  And, I would like to thank God for allowing me to be able to participate and to my family and friends for the support.”

The riders will travel from Cherokee to New Echota for the official start of the journey.  New Echota is the site of the Cherokee Nation capital before the forced removal in 1838.