It was a Tuesday afternoon last week and Ray Kinsland was driving a school bus to the Cherokee Central Schools to pick up children – just one example of literally thousands where he has stepped in when needed.

His Cherokee name is Di-sde-li-sgi-a-ni-wi-ni which translates as “Helper of Young Men”. 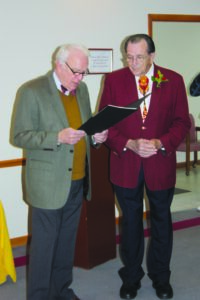 He has faithfully served the Cherokee community and the Eastern Band of Cherokee Indians in a wide-variety of capacities –most notably as the general manager of the Cherokee Boys Club for the past 53 years.  During that span of time, Kinsland has worked with 11 Principal Chiefs, 27 Tribal Council and 27 School Boards.

Kinsland’s last day was Friday, Oct. 1 as Tommy Lambert took the reins as the new general manager of the Cherokee Boy’s Club.  But, Kinsland agreed to stay on for a few months to make sure the transition went smoothly.    This past Friday, March 11 was his official last day on the job.

“I just thank the Lord and the Cherokee people for giving the blessing and opportunity to live here and to work here,” said Kinsland.  “It’s great to see how this Tribe has grown and has been able to take problems and turn them into opportunities.”

Kinsland’s accomplishments over the past 53 years would literally take up each page of The Cherokee One Feather for the next seven issues.  On Friday, he received another honor as State Rep. Phil Haire was in attendance at a drop-in celebration for Kinsland’s retirement and presented him with a Certificate of Appreciation from the North Carolina General Assembly.

Kinsland graduated from N.C. State University in 1958 with a bachelor’s degree from the College of Agriculture and Life Sciences.  In 2005, he received an honorary Doctor of Humane Letters degree from Western Carolina University.

“Ray Kinsland has been a strong leader and great role model for our community,” said Principal Chief Michell Hicks.  “His commitment and dedication to helping the Eastern Band of Cherokee has been proved time and time again.  He has worked tirelessly throughout his life to serve the Cherokee people and has made a profound and lasting impact on this Tribe.  I would say that he will be sorely missed, but I think we all know he will still be here working and helping for as long as he is able.  Thank you Ray for everything!”

Vickie McCoy worked with Kinsland at the Boy’s Club for 25 years.  “All of the Cherokee people, and this community especially, have had greatly enriched lives because of Ray Kinsland’s vision,” she said.  “His leap of faith over fifty years ago began the Cherokee Boys Club.  I think our new school is the culmination of his life-long dream for our people and I truly believe when Ray began the Club that was the turning point in Cherokee’s educational system and was the true foundation of our new school campus.”

McCoy continued, “Ray’s retirement is just a change in his employment status and will not change his dedication to the Cherokee people.  I don’t believe Ray ever worked a day in his life, but rather his passion fulfilled the many goals and visions he had to make our community and lives better.  Ray Kinsland is Cherokee’s Will Thomas of this era because of his life-long dedication and contributions to the Cherokee people.”

Kinsland related he is now going to work on organizing and categorizing his vast archives of photographs and documents at the Cherokee Boys Club.  He will also continue to serve as “The Voice of the Braves” at home basketball and football games and will continue to serve in all capacities as needed.