David Wyatt, GIS manager for the Eastern Band of Cherokee Indians, has been appointed by Secretary of the Interior Ken Salazar to serve on the National Geospatial Advisory Committee (NGAC).  The committee meets quarterly and gives recommendations on a various geospatial issues including the National Spatial Data Infrastructure (NSDI). 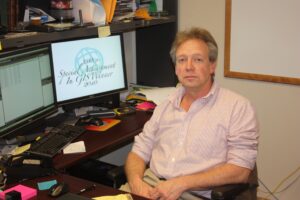 David Wyatt, shown in his office, has been appointed to the National Geospatial Advisory Committee. (SCOTT MCKIE B.P./One Feather)

“I think it’s a good opportunity for the Tribe to work more closely with the federal government especially with land and land records,” said Wyatt.  “That’s mostly what I’ve been focusing on with the Tribe’s GIS.”

The databases created are staggering – 1.5 million pages of documents.  “We’ve tried to make the Tribe’s integrated GIS to be a database that can work for the future of the Tribe and to eliminate a lot of duplication of information within the Tribe.”

All of this work has garnered Wyatt and the Tribe recognition within the field of GIS.  The Eastern Band of Cherokee Indians received a Special Achievement in GIS (SAG) Award from ESRI in 2010.  The Tribe was one of 125 awardees internationally from hundreds of thousands of entrants.

Wyatt related that the Tribe has been able to share with other tribal nations and help them with their GIS projects.  Next week, officials from the Seminole Tribal Historic Preservation Office are visiting Cherokee to learn about the GIS systems and discuss how that can aid both tribes with protection of sites and historic jurisdiction.

Information from the DOI states, “The NGAC provides a forum to convey views representative of partners in the geospatial community.  The members of the NGAC report to the chair of the Federal Geographic Data Committee (FGDC), which is the Federal interagency executive group responsible for providing leadership and direction in Federal geospatial programs.”