Historic visit made to address Violence against Women

The U.S. Department of Justice reports that 1 out of every 3 American Indian women will be raped in their lifetime and 75 percent will be physically assaulted.  Rashica Manjoo, United Nations Special Rapporteur on Violence Against Women, visited Cherokee on Friday, Jan. 28 to gather information on the problem in Indian Country. 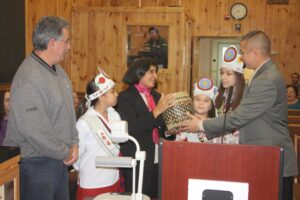 “It is much nicer to come visit and hear what the realities are,” said Manjoo who is the second Special Rapporteur to ever visit Indian Country.  “The international law domain seems very distant many times in indigenous and tribal communities.”

Manjoo, a South African attorney, is not an employee of the United Nations or any country, but is an expert doing research that she will compile and give to the U.N.’s Council on Human Rights.

“My focus is women, and unfortunately, throughout the world that includes girls,” she commented. 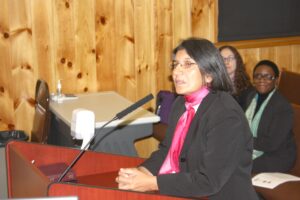 She added that the epidemic is linked to the fact that there are many legal barriers preventing tribes from appropriately dealing with the problem.  “Tribes can handle and provide effective legal remedies if given the opportunity.”

Principal Chief Michell Hicks welcomed Manjoo and added, “Native Peoples have struggled for a long time with this jurisdictional issue.  We want to find better results than we have today.” 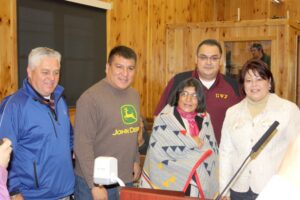 Vice Chief Larry Blythe also welcomed Manjoo and stated, “This visit will give you a better understanding from a tribal perspective of some of the challenges we face.  We do not want any child to become a statistic.  It’s an ongoing battle.”

Juana Majel-Dixon, first vice-present of the National Congress of American Indians (NCAI) and member of the Pauma-Yuima Tribe, was present on Friday and told EBCI officials, “I don’t think you see the breadth yet of what you have done.  It is a portal as an opportunity to affect change.”

Also present on Friday was Millie Black Bear, Rosebud Sioux, who is a long-time advocate for women as well as a domestic violence survivor.  She thanked the EBCI for arranging the visit by the Special Rapporteur and commented, “I really would like to see the Cherokee Nation to continue to work on the reauthorization of the Violence Against Women Act.” 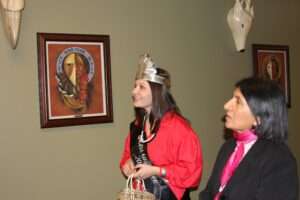 Originally passed in 1994, the Act was reauthorized in 2000 and 2005 and is up for reauthorization again this year.

Kirsten Matoy Carlson, staff attorney with the Indian Law Resource Center and Cherokee Nation citizen, told EBCI officials, “I want to thank your community for being open to see how we can use international law to better protect our people.”