Cherokee Woman slated to lead One Dozen Who Care

At the December 2010 regular board meeting, the Board of Directors of One Dozen Who Care, Inc., (ODWC), a non-profit 501 (c) (3) Community Development Corporation in Andrews, hired Lisa Jones, an EBCI tribal member of Robbinsville, as the new Executive Director.  She began her duties on Jan. 18. 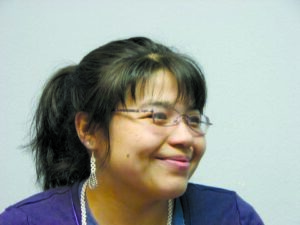 Ann Miller Woodford, the founder and past executive director states, “We are excited to welcome Lisa Jones as our new Executive Director.  We look forward to a new spirit of involement and cooperation as we help to develop and strengthen leadership and entrepreneurship and build bridges between cultures and races in the communities of far western North Carolina.”

“At ODWC we help to strengthen local leadership and create strong community bonds by supporting and encouraging economic advancement, social, cultural and educational activities.  All individuals need support from within their community to succeed in life,” Jones said.

She received an Associates in Arts in 2005 from Tri-County Community College.  In 2008 she received her Bachelor of Science degree in Criminal Justice.  By the end of this year she will have a Masters Degree in Executive Management and Criminal Justice.

In 2005, Jones was named Snowbird Woman of the Year for saving an elderly woman’s life by using her CPR training.  During her six years working as a Sexual Assault Advocate through the EBCI Domestic Violence program she and two co-workers formed the Expect Respect Program.  She is a volunteer for the Snowbird Community Club, and the Snowbird Free Labor Group.

Jones is passionate about helping people.  She is excited about the opportunity to use her abilities and talents to move existing programs of ODWC forward, and to implement new ideas.

About:  One Dozen Who Care was organized by twelve African American women in 1998 to train leaders and create community bonds.   Woodford was Executive Director until 2009.  Kassandra Greene served as Interim Executive Director since 2009.  ODWC  is located at 65 Wilson Street, Suites 6, 7, Andrews, NC., 828-321-2273

–  Source: One Dozen Who Care