Jefferson Keel, president of the National Congress of American Indians (NCAI), will deliver the annual State of Indian Nations address on Thursday, Jan. 27 at 10:30am.  The speech will be delivered to an audience of tribal leaders, representatives from the United States government, and citizens of tribal nations and the United States. 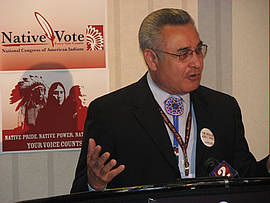 The speech will reflect on the state of Indian Country going into 2011 and outline the key priorities for the federal government to consider when working to uphold the federal trust responsibility to tribal nations.

Keel is serving in his second year as President of NCAI and is the Lt. Governor of the Chickasaw Nation.

A member of the United States Congress (TBA) will provide a response to the speech. The event will be hosted at the Newseum’s Knight Studio in Washington, D.C. and will be webcast live on NCAI.org.  The speech will also be carried on radio stations throughout the country by Native Voice 1 and Native America Calling.