Manjoo to study Epidemic of Violence against Native Women in the U.S.

A United Nations expert on women’s human rights is investigating why Native women face the highest rates of sexual and physical assault of any group in the United States. 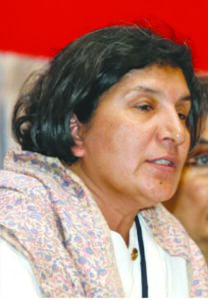 Rashida Manjoo, United Nations Special Rapporteur on Violence Against Women, will visit the Eastern Band of Cherokee Indians in Cherokee, North Carolina on Jan. 27-28.  Manjoo will meet with tribal leaders and advocacy organizations to learn more about the epidemic of violence against Indian women and what the United States can do to safeguard the human rights of Indian women.

According to U.S. Department of Justice statistics, one out of three Native women will be raped in her lifetime, and three out of four will be physically assaulted.  Indian women are stalked at a rate more than double that of any other population.  These statistics are linked to legal barriers that prevent Indian nations from adequately responding to crimes.

Unlike all other local communities, Indian nations and Alaska Native villages are legally prohibited from prosecuting non-Indians and felony offenders for violence that occurs within their tribal lands and communities.

“A visit to a sovereign Indian nation will allow the Special Rapporteur to learn firsthand about the distinct legal barriers that prevent American Indian nations in the U.S. from protecting their women citizens,” said Painttown Rep. Terri Henry who is also the co-chair of the NCAI Task Force on Violence Against Women. “Indian and Alaska Native women’s rights are violated everyday and they are routinely denied access to justice. This has to stop.”

The Special Rapporteur will visit the EBCI tribal courts, the police department, and the Cherokee Indian Hospital and Beloved Women’s Wellness program providing services to women.  Findings from the trip will be reported back to the United Nation’s Commission on Human Rights along with recommendations to the United States on how to better protect women’s human rights and to stop the violence.

The Special Rapporteur’s visit is jointly hosted by the National Congress of American Indians, Clan Star and the Indian Law Resource Center.