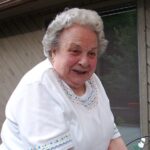 She attended Winthrop College, taught elementary grades in a two-room school house for two years, and graduated from Duke University with a BS in Nursing in 1943, scoring 9th from the top on her nursing boards. After additional graduate work in psychiatric nursing, she became director of nursing at Highland Hospital, Asheville, NC. At Duke she met her future husband, Philip Dewees, while he served in the Civilian Public Service. They married in 1943, lived in PA and WI for Phil’s medical training, and moved to Sylva, NC in 1951, where she assisted him in setting up his family practice. Dr. Dewees died in 1973.

Lib was chosen as “Woman of the Week” in 1964 by The Asheville Citizen newspaper. That article stated “Whenever there’s a worthy cause to be championed, you’ll likely find Elizabeth Dewees of Sylva on the front line. It doesn’t matter whether or not the cause is a popular one; once she in convinced that something needs to be said or done, she gets on with it.”

She has been an amazing role model for family and friends, providing jokes and hugs, as well as roots and wings. Recently she said, “All things considered, even at this age, I still want to change the world.”

A memorial service will be held Saturday, Jan. 22 at 3 pm at Appalachian Funeral Services in Sylva. Family will receive friends at the funeral home from 1-3 pm that day.

In lieu of flowers memorial tributes may be made to The Good Samaritan Clinic of Jackson County, 538 Scotts Creek Road, Sylva, NC  28779.