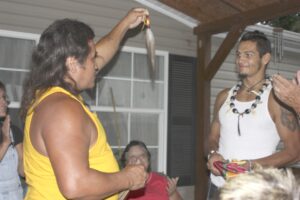 Jim Long (left) presents Dan “The Handler” Hornbuckle, an EBCI tribal member, with an eagle feather for his accomplishments in MMA fighting and for representing the Tribe in a positive manner. Hornbuckle was the runner-up in the Bellator Fighting Champtionships Season 2 welterweight tournament and holds a professional fighting record of 21-3. (Photos by Scott McKie B.P./One Feather)

“It’s not about the glory,” Dan “The Handler” Hornbuckle told a group of young mixed martial arts fighters he trained with at the Birdtown Rec. Center on Monday, July 26.  “It’s about what you give back.”

Hornbuckle, an EBCI tribal member, is a rising star in the MMA world having just been the runner-up in the Bellator Fighting Championships Season 2 welterweight tournament.

This past week, he took a little time off from his busy training schedule to come home to Cherokee and visit family and friends.   He trained with the local fighters on Sunday and Monday mornings and on Saturday, July 24 he was a special guest at the “Redemption” MMA event held at the Birdtown Rec. Center. 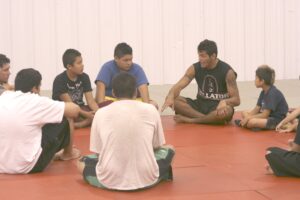 On Monday morning he stressed teamwork, loyalty, responsibility and dedication to the young fighters.  “We punch each other in the face and hug afterwards.  Where else can you do this?”  Hornbuckle said it is always important to respect one’s elders, parents, teachers and other people.

During Monday’s training session, he gave pointers on his specialty of Brazilian jiu-jitsu and tried to help with training and life tips as well.  “This is a thinking game.  Be consciously aware and know what your goal is.”

Clyde Dull, who trains local MMA fighters at the Birdtown Rec. Center, along with several of his students including Landon French and Cheyenne Arneach presented Hornbuckle with an EBCI tribal flag as a way of thanking him.

Hornbuckle is currently training for a fight on Thursday, Aug. 19 at the Chicago Theatre in Chicago, IL against former UFC fighter Brad Blackburn (15-11-1).

Hornbuckle trains at America Top Team in Florida and lives in Mahomet, IL with his wife Melody and three daughters.