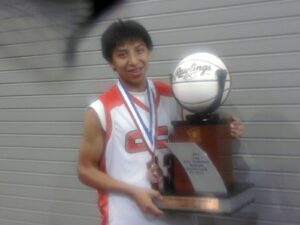 After a USBA National Title Championship in Myrtle Beach, SC, Jayce Wolfe was not finished.  He was on to Hampton, VA to play in the Division 1 AAU Nationals.  There were 78 teams from all over the country to compete for the National Title.

Jayce, an EBCI tribal member, played with CC1st from Charlotte, NC.  They finished 7th place in the tournament.  This was a great accomplishment for the team since Jayce had never played with them before.

Throughout the event, there were many groups scouting the teams and players.  Jayce was recognized one day as a top performer in the event.

Basketball Spotlight.com had the following to say about Jayce:
“Jayce Wolfe Guard (CC1st)- Wolfe exploded earlier in the day against Memphis. This kid is full speed ahead and specializes in scoring in traffic. He had several guards puzzled trying to figure out his style. He ran out of gas against the Aces because of the effort he puts in and the heat in the gym.”

At the conclusion of the tournament, once again he was recognized for his efforts as one of the Top 10 Point Guards in the Nation.  He was #8 and BasketballSpotlight.com reported the following:
“8. Jayce Wolfe (CC 1st)- Wolfe has a motor out of this world. He’s constantly on attack mode off the bounce. It’s nothing fancy with his game but defenses still have a hard time stopping him.”

“Jayce has worked hard these past two weeks, we want him to know that we are very proud of all his efforts and personal determination he puts into everything he does,” said Blaine Wolfe.  “Thank You Jayce for an exciting two weeks of basketball.  Words can’t express the joy and pride we have for you and all you have accomplished.”