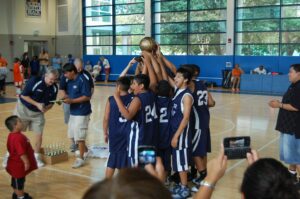 The Cherokee Flight 12U Boys Basketball Team won the USBA National Championship in North Myrtle Beach, SC on Saturday, July 17.  They defeated the Charleston Cavaliers from West Virginia in the Championship Game and went undefeated in the tournament.

Cherokee Flight finished pool play with some big wins.  They outscored their opponents by 20 points or more.  There were eight teams that finished 3 – 0 in pool play and based on Points Scored and Points Allowed, Cherokee Flight was seeded 5th for Bracket Play.

This was the beginning of a battle for the Championship Win.  The first game in bracket play was against RJ Youth Club got off to a slow start for the Flight.  After the 1st half, they were down 20 – 17. 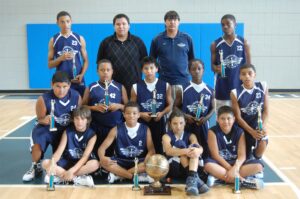 The Flight picked up the pace and outscored RJ Youth Club 26 – 16 the 2nd half to win by 7.  Their next game against Loudon Triple Threat was another close game.  They were back and forth throughout the game.  Finally, in the last 1:30 of the game, the Flight’s continuing drive to the basket and drawing a foul was what won the game.  The Flight went to the line 11 times and made seven free throws to secure the win.

In the semi-final game, the Flight met up with the GA Heat.   At the half, they were down by two points.  They trailed throughout the game, but with 45 seconds left in regulation time, they outscored GA heat 7 – 0 to tie the game and go into Overtime, twice.  Once again, free throws won the game for the Flight.

The championship game was against the Charleston Cavaliers from West Virginia.  This was a 28 minute battle that seemed like an eternity.  It was back and forth and the Cavaliers had a solid team.

The Flight was up by five points with eight seconds left on the clock and the Cavaliers got the ball down the court and passed to their 3-point shooter and he drained a three which brought them within two points.   Cherokee Flight held on to the ball to seal the win.  Once again, the Flight went to the free throw line 19 times and made 15 for an outstanding 79% shooting percentage from the line.

“I want to congratulate Cherokee Flight for their determination and more importantly for the sportsmanship they demonstrated throughout the event,” said Blaine Wolfe.  “There were many games when we had other teams cheering us on with our hometown fans; to see and hear the crowds at our games was inspiring.”

“Thank you to all our fans and supporters, we couldn’t have done this without all of you. I also want to thank our sponsors throughout the season for your support.  Thank you to Dwight and Catamount Exxon, Mike Parker, Bill Taylor, River Valley Store and Campground, Cherokee Tribal Gaming Commission, Pizza Inn, Granny’s Kitchen, Richard Owle, Cherokee By Design and all the individuals that participated in our team and individual fundraising efforts.  A special thanks goes to the Birdtown Cherokee Life team for always working with us for our practices and supporting the team.”

Wolfe went on to say, “This has been a great season with Cherokee Flight.  We finished our season with a record of 47 – 1.  We have 6 first place finishes, a State Championship and now a National Title. I want to personally congratulate the team for a remarkable season.  Thank you Jorree for your commitment and assistance with the team, I couldn’t have done it without you.  Thank you Jaidan for always being there for the team to keep the scorebooks and thank you Chris for keeping up with the team stats and coordinating all of our events.”