New Events Center on schedule to open at Harrah’s Cherokee

An artist rendering of the completed Events Center. (Image courtesy of Harrah's Cherokee)

The new Events Center at Harrah’s Cherokee Casino & Hotel is on schedule to open in late August.

The 3,000+-seat Center will feature two large VIP Suites, two small VIP suites and box seats in addition to a state-of-the-art surround sound system and 32-foot screens on each side of the stage.  It will also feature 27 47” LCD screens in pre-function areas and five 52” LCD screens in the balcony area. 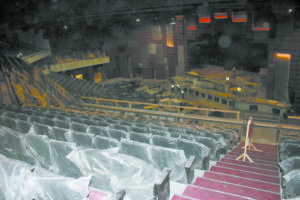 A photo, taken Tuesday, July 20, from the top of the balcony shows the progress on the Center. (Photo by Scott McKie B.P./One Feather)

The Center was designed by the Cunningham Group, a Minneapolis-based architecture firm that was named 39th in Architecture Magazine’s 2009 list of  “Top 50 Architecture Firms in the Country”.  It is being built by the Yates-Rentenbach Construction firm based in Knoxville, Tenn. and currently around 500-600 people are working virtually around the clock to finish the project.

Other notable star bookings include:

A special community event is being planned for Thursday, Aug. 26.  Check the One Feather for more details as they are released.

The Event Center, which is non-smoking, will only be open to patrons 21 years of age and older.

For more information or to purchase tickets for an upcoming show, visit www.harrahscherokee.com or 1-800-Harrahs.