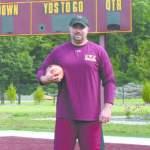 Cherokee has a new head football coach and he’s hit the ground running.  While new to the head coaching job, Craig Barker is not new to Cherokee having served as defensive coordinator for the Braves for the past four seasons.

Barker graduated from Swain County High School in 1993.  In his years there, he was a stand-out player being named All-Conference three times and winning two state championships.

From there, he went on to play outside linebacker at Appalachian State University and continued his success by being a three-year letterman.   He was a member of the 1995 Southern Conference championship team and graduated with honors with a degree in Criminal Justice in 1998.

“I believe in running the football, but we’re going to have a timely passing game as well,” said Barker.  “We’re going to try to open it a little bit and we’re going to what we do best – that’s give people a physical style of football.”

When asked what his goal was for his inaugural year as a head coach, Barker said the goal of every coach is a state championship and he is no different.  “We’re not going to sell ourselves short.  That’s the ultimate goal.  We’re here working hard.  We’re going to go out and we’re going to compete.”

He said his players are students first and athletes second.  “I’m going to expect a level that they succeed in the classroom and on the football field.”

Barker commented that he wants to instill in his players a sense of pride and a work ethic that will allow them to overcome adversity both on the field and later in life.  “We want to build fine young men here.”

During his four seasons at Cherokee, he said he’s thoroughly enjoyed working with the players and the community.  “We’re going to put a football team out on the field that the Eastern Band of Cherokees can be proud of.”

He hopes to get the community more involved with Braves football again as well.  “The boys are having a great summer in the training room, and I want to invite everyone to come out and support the Braves this fall.  I also want to thank this community for this great opportunity.  It’s an honor and a privilege to coach here.”

A “Meet the Braves” Cookout is planned for Friday, July 30 at 6:30pm in the parking lot adjacent to the Braves Fieldhouse.  All community members are invited to meet the coaches and players and enjoy a free meal.

The Braves’ first official practice is set for Monday, Aug. 2 at 4pm.

Barker resides in the Tow String Community with his wife and two daughters.