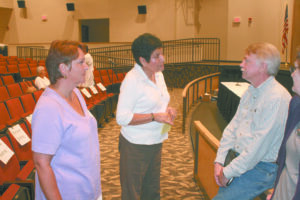 The harvesting of native plants in the Great Smoky Mountains National Park by EBCI tribal members has been a controversial issue for the past few years and several members have even been cited with federal charges.  A Tribal Consultation meeting between EBCI tribal members and officials and National Park Service (NPS) officials, including NPS director John Jarvis, was held at the Cherokee Central School on Friday, July 16.  The meeting was held to address the gathering issue as well as the re-opening of a road that would provide emergency vehicles better access to the new Cherokee Central Schools.

Most of the discussion centered around NPS regulation 36 CFR 2.1(a) which prohibits individuals in a national park from “possessing, destroying, injuring, defacing, removing, digging, or disturbing from its natural state” the following: living or dead wildlife or fish and parts such as antlers or nests, plants or plant parts, paleontological and archaeological resources, mineral resources, and wood. 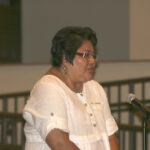 “It was getting to the point where Tribal members who were going into the Park to gather food and ceremonial and religious plants were getting cited in court for doing something they’ve done for nearly 10,000 years,” said Big Cove Rep. Teresa McCoy.  “They didn’t understand it and we didn’t either.”

She thanked the NPS officials for coming to Cherokee to hold the discussions and said she would like to be a part of any group of NPS and Tribal officials that is formed to discuss such regulations within the Park.

Jarvis, a 35-year NPS veteran, said the regulation is “just wrong” and said it should be changed and soon.  “It became a mission of mine to fix this.  Now, that I’m director, I’m in a position to fix it.” 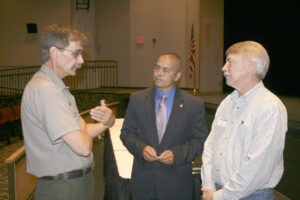 He said it frustrates him that the process of fixing the regulation has taken in excess of 15 years.  “You should never have been subjected to that,” he told the crowd of mainly EBCI tribal members gathered on Friday.  “That’s why we’re on the path to fix this so that the regulation will be changed.”

Principal Chief Michell Hicks thanked Jarvis for coming to Cherokee and said, “I just appreciate your openness and willingness to put things on the table that need to be further discussed.”

Chief Hicks said he was also thankful for the relationship with Dale Ditmanson, Great Smoky Mountains National Park superintendent.  “We can’t always agree about everything, but we do appreciate your respect for the Eastern Band in at least being able to come to the table and talk about things.”

Pat Parker, NPS staff, gave a brief power point presentation entitled “Regulations Governing Gathering of Plants and Minerals” which outlined some of the regulations currently on the books.  While some EBCI tribal members have gotten into legal difficulty over their harvesting of ramps and sochan, not all plants are illegal to harvest.

According to 36 CFR 2.1(c)(1), the park superintendent may designate certain “fruits, nuts, berries and unoccupied shells” for harvesting within each park.

Marvel Welch and her sister, Judy Welch Smith, were both cited in federal court for gathering sochan in the Park.  Marvel related the charges against them were dismissed by the judge due to there being no fore-warning about the sochan gathering ban.  She told the crowd on Friday that she feels they were punished for being themselves and doing what their ancestors have done for thousands of years.

Friday’s meeting was one in a series of tribal consultation meetings the NPS is having with tribes across the country on this issue.  According to the power point presentation, the publication of the proposed rule changes could occur this fall or winter with a comment period beginning in late winter or early spring 2011.

“I just want you guys to take that to heart whenever you’re talking about this long process that we have to go through in order to allow our Native people to collect plants for food or for medicinal purposes and things.”

Amanda Swimmer, an EBCI trlbal elder from the Big Cove Community, has been the top proponent for the re-opening of an old Park road that would connect the Big Cove Road with Newfound Gap Road for the purpose of allowing an alternative route in and out of the new Cherokee Central Schools in the event of an emergency.

She told Friday’s crowd that she has been working on this project for at least two years.  Her concern is that Big Cove Road could be blocked in the event of an emergency such as a school bombing.  “I’m concerned about the safety of the children…how are we going to get them out if something happens?”