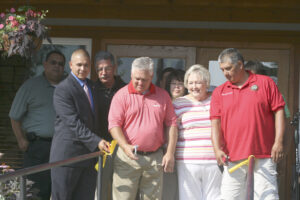 The new Tribal Operations Program (TOP) building was officially opened with a ribbon-cutting  ceremony on Friday, July 16.  The new structure replaces the one destroyed by a fire on Dec. 20, 2008.

“This enables us to serve our clients in our community in a warm and inviting environment,” said Rosie McCoy, TOP manager who thanked many tribal officials and programs for their work on the project.  “Being back at our old location is truly appreciated.”

The TOP program had been housed temporarily at the Beloved Women’s and Children’s Center and then the Leon D. Jones EMS Building.

“There’s a lot of people to thank this morning especially our crews that took this aside,” said Principal Chief Michell Hicks as he thanked EBCI Facilities Management for their work in the construction end of the project.  “This is a very beautiful building.  It’s a simple building, but yet it’s beautiful and definitely will meet the needs of this department for a long time to come.”

Vice Chief Larry Blythe related, “We truly are blessed as a people and sometimes we lose sight of just how blessed we are…I mean the resources we have to be able to recreate this building that for a long time was lost in the fire, but you know, as you look at the dedicated employees and you look at how this Tribe has progressed it’s because of people like you and the employees that this Tribe has.  Let’s not lose sight again of just how blessed we are.”

To date, no one has been charged with arson in the fire.  Following the fire, three people were arrested and charged with various crimes not directly related to the fire itself, but those charges were “Dismissed with Leave to Refile”.