of the Choctaw Nation of Florida 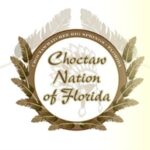 WASHINGTON – Deputy Assistant Secretary-Indian Affairs Donald “Del” Laverdure, acting on behalf of Assistant Secretary – Indian Affairs Larry Echo Hawk who was travelling, issued on July 2, a proposed finding not to acknowledge the petitioner known as the Choctaw Nation of Florida (Petitioner #288) as an Indian tribe. The petitioner, located in Marianna, Fla., has approximately 77 members.

It claims to be a group of Choctaw Indians that migrated from North Carolina to Georgia, and then Florida following the Indian removal of the 1830s. None of the evidence demonstrates the validity of this claim. The evidence shows the petitioner is an association formed in 2003 of individuals who claim but have not documented Indian ancestry.

Under the federal acknowledgment regulations (25 C.F.R. Part 83), the Department may not acknowledge associations, organizations, corporations, or groups of any character formed in recent times.

The Department evaluated the group’s petition under 83.10(e) of the acknowledgment regulations, which allows for issuing a proposed finding under criterion 83.7(e) only. To meet criterion 83.7(e), the petitioner must demonstrate Indian ancestry from a historical Indian tribe or tribes that combined and functioned as a single entity. The petitioner claims its members descend from the historical Choctaw Indian tribe. The Department examined an extensive body of documentation submitted by the petitioner and obtained by Department researchers to evaluate this claim. All the evidence clearly shows the petitioner’s ancestors were not identified as Indian and do not descend from a historical Indian tribe. Instead, the evidence clearly shows they were consistently identified as non-Indians living in non-Indian communities.

The Department will publish notice of this proposed finding in the Federal Register. The regulations provide that the petitioner or any party will have 180 days after the publication of the notice to submit comments to rebut or support the proposed finding before the Department issues a final determination. After the comment period, the petitioner will have an additional 60 days to respond to the comments from interested parties. Following the response period, the Department will begin work on a final determination.

The Department will post copies of the proposed finding and Federal Register notice on the Indian Affairs website at https://www.bia.gov/WhoWeAre/AS-IA/OFA/RecentCases/index.htm.