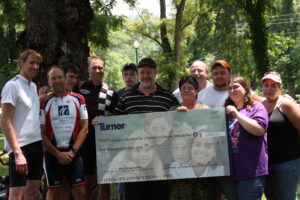 Four bicyclists completed the ride of a life time Sunday when they reached Cherokee after riding the entire length of the Blue Ridge Parkway. Their journey began on June 19 at mile marker zero as the four friends Brian Schick, Tim Demmitt, Bob Grunewald and Mike Yon, began their trek toward Cherokee. The riders call Charlotte home but Brian Schick has been working in Cherokee recently and has been instrumental in forming the Madison Hornbuckle Children’s Cancer Foundation in conjunction with the Eastern Band of Cherokee.

To commemorate the ride, Brian Schick’s employer, Turner Construction, which is  currently working on the expansion of Harrah’s Cherokee Casino & Hotel, donated $5000 to the Madison Hornbuckle Children’s Cancer Foundation.

“I would like to thank this group for their donation to the Madison Hornbuckle Children’s Cancer Foundation,” said Principal Chief Michell Hicks.  “This is the first of many fundraising efforts to get this Foundation established.  The committee members are in the process of setting policies to govern this Foundation and I am very excited to see what comes out of this effort.”

The Foundation was announced by Chief Hicks, in conjunction with Ken Leach, Turner Construction executive vice president, on Friday, April 9 at the topping off ceremony for the third hotel tower at Harrah’s Cherokee Casino & Hotel.

It is aimed at helping children stricken with cancer.  The Madison Hornbuckle Cancer Foundation for Children, named for the late Madison Hornbuckle – an EBCI tribal member who recently passed away from cancer, will be a joint venture between the Eastern Band of Cherokee Indians and Turner Construction.

One Feather staff contributed to this report.