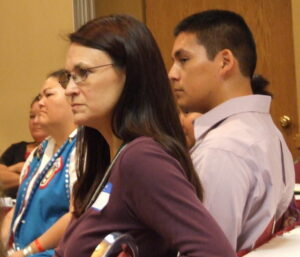 Eighteen leaders of Native American foundations that provide funding and other resources to nonprofit organizations met in Cherokee June 15-17 to design regional networks that will strengthen leadership in Indian Country’s nonprofit sector. The gathering was hosted by Native Americans in Philanthropy (NAP) and Cherokee Preservation Foundation.

“We have come to Cherokee because we believe that an intentional network can add value to Native leadership and capacity-building programs that usually operate in silos,” said Joy Persall, executive director of NAP. “NAP works to advance philanthropic practices grounded in Native values and traditions. While we operate on a national level, we are building regional networks in areas such as the Upper Plains, the Southwest and, perhaps, the Southeast as a means of promoting collaboration, networking, capacity building, leadership development and strategic investment. NAP’s thinking is that each regional network will be able choose which activities in which it will engage and for which it will get support from NAP’s staff.”

The regional networks will build on elements of leadership that reflect Native cultures. For centuries, indigenous communities have worked in such a way that power is shared and leadership is a dynamic, interconnected process that relies on many individuals.

“We want the regional networks to support people who do what has to be done to create healthy Native communities,” said Ron Rowell, chairman of the board for Native Americans in Philanthropy and chief executive officer of the Common Counsel Foundation. “These are people who don’t want or need a light to be shined on them. They lead with humility.”

One of the key reasons for creating the regional networks is to help younger leaders be prepared to take the baton as leaders from baby boom generation begin to retire.

Kevan Killer, executive director for the Native Youth Leadership Alliance, said that 50% of the members of tribes in South Dakota are 18 years old or younger, and others at the meeting said demographics in their tribes are similar.

In discussing the generational leadership shift that is on the horizon, meeting participants addressed these questions: Who are our young Native leaders? What role should elders serve as they move out of their formal organizational roles? How can our regional networks support cross-generational communication?