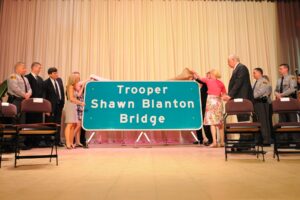 Family and friends joined Tribal and State officials for the official commemoration of the Trooper Shawn Blanton Bridge honoring the memory and bravery of the slain state trooper on Thursday, June 17. (Photo courtesy of Katy Warner/NCDOT)

Two years to the day that N.C. State Highway Patrol Trooper Shawn Blanton, an EBCI tribal member, was killed during a routine vehicle stop, he was honored as a bridge on I-40 was named in his honor.  The Exit 31 bridge in Canton was officially named the Trooper Shawn Blanton Bridge during a ceremony held Thursday, June 17.

Vice Chairman B. Ensley and Painttown Rep. Tommye Saunooke represented the EBCI at the event. 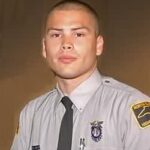 The ceremony, organized by the N.C. Department of Transportation, was presided over by Canton Mayor Pat Smathers. The Town of Canton has petitioned the NCDOT for the bridge re-naming. “It is an honor to have that monument in this town,” Mayor Smathers said.

J. W. Kilpatrick III, the Chairman of the Haywood County Commissioners, commented, “The dedication of the bridge will be something we will always remember.”

Colonel Glover commented that the “bridge will remind us of the dedication and sacrifice of Shawn,” and that it will remain “hallowed ground.”

Captain McCoy told personal stories about Shawn, his life, his family and his dedication to the NC Highway Patrol.

Jim Trogdon, Chief Operating Officer of the NC DOT voiced similar sentiments about Trooper Blanton before asking Michaela Blanton, Shawn’s widow, to speak on behalf of the family. She was joined onstage by Shawn’s parents Janell Youngbird and David and Jennifer Blanton. A large group from Cherokee also attended including family and friends, the Cherokee Indian Police Department, and Cherokee Emergency Services personnel.

The signs were in place later that day at the bridge.