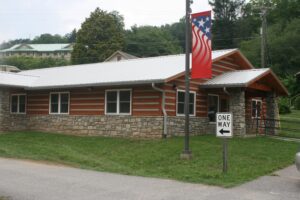 Like a phoenix rising, the Tribal Operations Program (TOP) now has a new building and staff has officially moved in.  The new building replaces the one destroyed by a fire on Dec. 20, 2008.

“The TOP staff are thrilled to be back at 67 Council House Loop,” said Rosie McCoy, TOP manager.  “Unlike before, each staff person has an individual office.  There’s also a conference room for Tribal Council and office space for our Council members to share.”

The TOP program had been housed temporarily at the Beloved Women’s and Children’s Center and then the Leon D. Jones EMS Building. 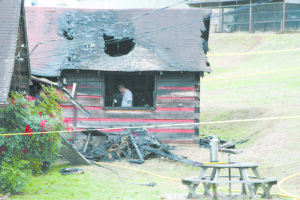 “Although the fire was a traumatic experience, we managed to continue providing the legislative services to the Council, Tribal programs, and the public,” said McCoy.  “Now, we get to do it in a beautiful new building.  We especially want to say thanks to Coss Hicks and Facilities Management for the building plans and getting the job done!”

McCoy continued, “The concept of the new TOP Building was to ‘fit in’.  With that in mind, rock from Boundary Tree was cleaned and used on the bottom half of the building – awesome job, Teddy Rose and crew.  The homey, log cabin look finished it off.”

An open house will be held in the next month McCoy said.

To date, no one has been charged with arson in the fire.  Following the fire, three people were arrested and charged with various crimes not directly related to the fire itself, but those charges were “Dismissed with Leave to Refile”.

Just after the fire, the Cherokee Indian Police Department released a statement saying, “The building (TOP) was fully engulfed and suffered substantial damage.  Cherokee Police Investigators, the Cherokee Fire Department, and a Maggie Valley PD Arson Investigator have determined that the fire was not electrical or accidental.”