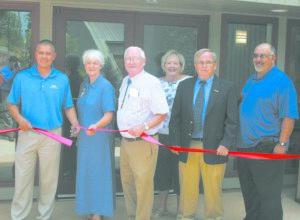 The Museum of the Cherokee Indian officially opened its new Education and Research Center with a ribbon-cutting and program on Friday, June 11.  The 8,500 square foot addition to the museum features a reading room, art studio, classrooms, and a conference room.

The new wing project cost $2 million and was funded by the EBCI, Cherokee Preservation Foundation, the Sequoyah Fund, and numerous individual donors.

Ken Blankenship, Museum executive director, said he appreciated everyone’s help including the $1 million allocated from the EBCI for the project.  “We really appreciate the Tribal Council stepping up.” 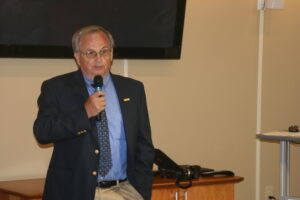 Ken Blankenship talks during the program followinng the ribbon-cutting.

He related that the Cherokee Preservation Foundation gave $300,000 for the project and challenged the Museum to raise $200,000 which they accomplished.  “I really want to thank all of the donors that kicked in to help finish the project.”

Bob Blankenship, Museum board, related he was present for the original ribbon cutting of the facility in 1976.  “It is an education wing that will present our story accurately to our own people and to the public.  We always say that our cultural attractions here – the Museum, the Unto these Hills drama, and the Oconaluftee Indian Village – are the heart and soul of this Tribe as it presents itself to the public and its own people.”

Bo Taylor, Museum archivist, shows some of the archival items that can be found at the Museum's website.

Susan Jenkins, Cherokee Preservation Foundation executive director, commented, “It is such an honor to be here, particularly to see this beautiful, beautiful building.  I was thinking last night that I don’t think there is anybody in Cherokee that can stretch a dollar like Ken Blankenship.  If you went anywhere else, this would probably be three and a half million dollars.”

Bo Taylor, Museum archivist, said, “I am so proud of what this Museum has done.  I feel like we have changed the face of Cherokee.”

He praised Ken Blankenship for this work ethic and dedication to the Museum and said that he and the staff are in favor of naming the new wing in his honor.  Taylor related that the Museum Board is poised to bring legislation to Tribal Council in the near future to make the name official.

“A lot of times we honor people when they’re dead and gone,” said Taylor, “but I want him to be able to enjoy it a little bit.”

According to information provided by the Museum, there are over 25,000 items (books, photos, historical documents, etc.) that can be found and accessed online at www.cherokeemuseum.org.  The items include: