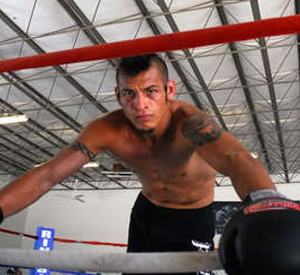 Dan “The Handler” Hornbuckle (21-2) is now two steps away from his goal – the Bellator Fighting Championships Welterweight belt.  The EBCI tribal member will take the next step on Thursday, June 17 as he faces Ben “Funky” Askren (5-0) in the finals of the Bellator Fighting Championships Season 2 welterweight tournament.    The fight will be held at the Power & Light District in Kansas City, MO and will be broadcast on the FSS network.

The winner gets a shot at the belt currently held by champion Lyman Good.

“All my sacrifice and sweat has lead up to this last 15 minutes,” said Hornbuckle who is currently training at America Top Team in Coconut Creek, Fla.  “I feel as though I’m prepared for all aspects of the fight and will leave it all in the cage on the 17th.  I’m the member that’s in the cage, but I’ll fight with all the power of the Cherokee Nation inside me.”

After his semifinal match, Bjorn Rebney, Bellator founder and CEO, commented, “He (Hornbuckle) continues to evolve and grow as a mixed martial artist.  He is an awfully dangerous welterweight and you’d be hard-pressed to find anyone in the world at 170 who would go in as a favorite against him right now.”

Hornbuckle’s last two submissions have been in tune with his Brazilian jiu-jitsu style although he can also strike and actually received recognition for a head kick knockout of Akihiro Gono last year which was named Fighting Stances’ “2009 Knockout of the Year”.

Hornbuckle normally trains at McVickers Martial Arts Academy.  He resides in Mahomet, IL with his wife Melody and three daughters.