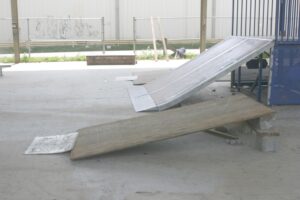 The current skate park in Cherokee, located across from the Yellowhill Community Building, will soon be replaced by a 12,000 square foot, state-of-the-art facility. (Photo by Scott McKie B.P./One Feather)

In the past few years, skateboarding has grown in popularity in Cherokee.  It is not uncommon to see skaters in the downtown area, in parking lots, or at the wildly popular skating facility across from the Yellowhill Community Building.  That facility, a converted basketball court, uses wooden ramps brought from the Birdtown Community Building several years ago.

Plans are now underway for a completely new, unique, state-of-the-art skate park to be built on a 3.5 acre tract just up the road from the existing facility in Yellowhill.  The park is set to be around 12,000 square feet.

At the request of Principal Chief Michell Hicks, Tribal Council approved up to $600,000 in funding for the project which is now in the design phase and could be done as early as the end of the year.

Brad Siedlecki, of Pillar Skate Park Design Studios, has been a skater since his pre-teens and has designed skateparks all over the United States and is now developing one in the Phillipines.

Slated to design the concrete Cherokee Skate Park, Siedlecki was in Cherokee on Thursday, June 10 and met with a group of around 20 local skaters to get their input into what they want to see in their park.

“We want to do our best to give you what you want,” he said.  “We like to take something you see in every skate park and change it up to make it unique.  We really want to make this park unique to your community.”

Jason Lambert, EBCI Planning and Economic Development, said, “We’ve got one shot at this and we want to make sure we get it right.”  He related that all of the details of how the park will be operated have not been worked out yet, but he said it will most likely be open to the public.

Siedlecki commented, “Right now, we want to concentrate on how to put the biggest bang, our biggest dollars toward the skateable surface.”  He plans to blog about the design phase in which he’ll take all of the ideas and comments garnered at Thursday’s meeting and develop them into the best possible use for the space.

Siedlecki said the design process is ever-changing.  “Until it’s in concrete, it is not finished.”

You can keep up with his blog at Pillar’s website – www.pillardesignstudios.com.

Siedlecki said he hopes to have the design completed within two months and hopes that the site preparation can be finished before the snow begins to fall this winter.  The total construction will be around three months, but a completion date could not be given due to weather considerations.

“Our goal is to be able to do this project this year,” he said.