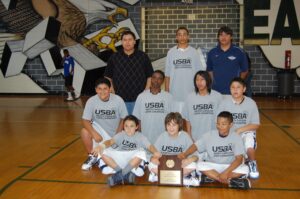 The 12U Boys Cherokee Flight team has been very busy with travel basketball over the past few months and we wanted to share our experiences and thank everyone that has been a part of our program.

Cherokee Flight is coached by Blaine Wolfe and Jorree Wolfe.   First of all, we would like to congratulate the Cherokee Flight team for their recent USBA State Championship win in Raleigh, NC.  With this win, this moved Cherokee Flight to the #1 position in the USBA National Rankings.  This is a great accomplishment for the team.

Next, we would like to thank all the parents for your continued support for your son and for the Cherokee Flight Team, we would not be able to travel and participate in these tournaments without each of you.

We also want to thank each player on the Cherokee Flight Team for their dedication to the team and especially for all of their time and effort that they put into each practice and game.  Each player continues to show improved skill and development in all areas.

Finally, thank you to all our sponsors and all those individuals who have supported us during all of our fundraising efforts.  We know that there are a lot of fundraising events going on, so we thank you for supporting Cherokee Flight throughout our season.

The Cherokee Flight Team consists of the following players: