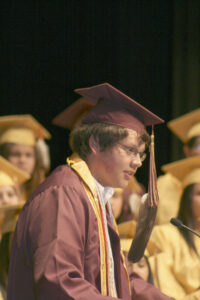 Nicolas Dalton Squirrell delivers the Valedictory address as Cherokee High School held its first graduation ceremony in the new school on the evening of Friday, May 28. (Photos by Scott McKie B.P./One Feather)

Nicolette Marlena Crowe summed up the entire evening as she sang “The Climb” during Cherokee High School’s graduation on Friday, May 28.  It has been a climb as this was the first class to graduate from the new school which took many years and many thousands of hours to plan, coordinate, and build.

Sixty-two seniors walked the stage and received their diplomas on Friday evening as a capacity crowd packed the Cultural Center.

Ray Kinsland, “The Voice of the Braves”, gave the commencement speech during what was reported as the 53rd Cherokee High School graduation he has attended.  He commended the graduates on their accomplishments and told them to always strive high in life and keep faith on their side. 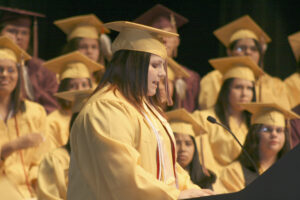 Jamie Lyn Pusch delivers the Salutatorian address during the ceremony.

CHS class president Alisha Rae Long told of some of the accomplishments of the Class of 2010, and she was recognized with the Principal Chief’s Award as well.  Both her and Squirrell will receive their awards during the regular Tribal Council meeting on Thursday, June 3. 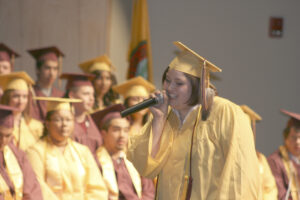 A slide show presentation honoring the Class of 2010 was shown prior to the awarding of diplomas.

One special recognition occurred as the diploma of Stephane Wayne Ruth was awarded posthumously to his family.  A member of the Class of 2010, he passed away in February and his photo was displayed in a chair during the graduation ceremony.

For a photo gallery from this event, please visit: