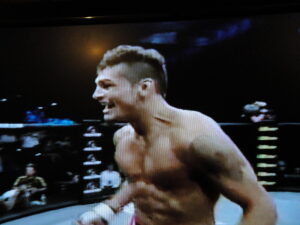 Dan "The Handler" Hornbuckle smiles after a first round win in the semifinals of the Bellator Fighting Championships Season 2 welterweight tournament on Thursday, May 20. (Image from FSSouth Broadcast)

DALLAS – Dan “The Handler” Hornbuckle, an EBCI tribal member, advanced to the finals of Bellator Fighting Championships Season 2 welterweight tournament on Thursday, May 20.  He submitted Steve Carl (13-2) with a kimura submission hold at the 2:31 mark in the first round.

“He (Hornbuckle) continues to evolve and grow as a mixed martial artist,” Bellator founder and CEO Bjorn Rebney said on Bellator.com.  “He is an awfully dangerous welterweight and you’d be hard-pressed to find anyone in the world at 170 who would go in as a favorite against him right now.  I’m looking forward to watching him again next month.”

Ben Askren defeated Ryan Thomas by unanimous decision to advance to the finals against Hornbuckle.  The time and place of that fight hasnot yet been determined.

It was the second first round submission win in a row for Hornbuckle (21-2) as he submitted Tyler Stinson with a triangle choke at the 2:03 mark in the quarterfinals match last month.

The last two submissions have been in tune with Hornbuckle’s jiu-jitsu style although he can also strike and actually received recognition for a head kick knockout of Akihiro Gono last year which was named Fighting Stances’ 2009 Knockout of the Year.

Hornbuckle trains at McVickers Martial Arts Academy and resides in Mahomet, IL with his wife Melody and three daughters.