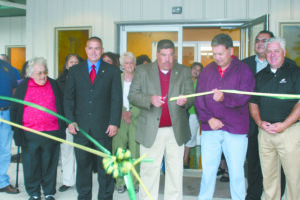 The long-awaited, brand new Big Y Community Building was officially opened with a ribbon-cutting ceremony on Tuesday, May 11.   The building includes a commons area, weight room, gymnasium, kitchen area, as well as a Veteran’s Memorial in front.

“This project has been worked on by many people,” said Principal Chief Michell Hicks.  “We ran into a number of obstacles, but sometimes good things make us wait.”

He continued, “We’ve got great communities in Cherokee, and I think that we’ve definitely been blessed.” 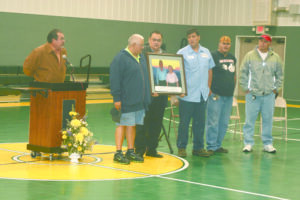 Members of the Crowe Family hold a photo of their grandparents, the late Albert and Regina Crowe, during an honoring held in the new Big Y Community Building on Tuesday, May 11. They were honored for donating the land where the new building, whose ribbon was cut on Tuesday, now stands. The photo will permanently hang in the front lobby of the building.

Phyllis Ashenfelter, a Big Y community member is the assistant to Vice Chief Larry Blythe.  In speaking on his behalf on Tuesday, she said she teared up with emotion upon driving up to the new facility and said she was very impressed as she drove up to the “mansion of a gym and community center.”

“I learned that the Big Y Community was the first community that was organized on the reservation,” she said.  “They didn’t have a community center.  It was mostly God-fearing people that met.” 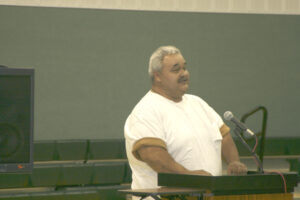 Albert Crowe, grandson of Albert and Regina Crowe who gave the land to the community where the new building now sits, spoke briefly about his grandparents.   “About 56 years ago, grandpa Albert transferred this land over to the Big Y Community Club for their use.”

He spoke fondly of growing up in the area.  “We’ve all played out here on this property and grew up around this property.”

Jokingly he said, “If we had a kind of facility like this and it was manned there wouldn’t have been as many bloody noses and fat lips.”

Crowe is the EBCI Deputy Administrative Officer and oversees the tribe’s Parks and Recreation department.  He related that the Big Y Building will be manned by two people immediately with a third to be added soon.