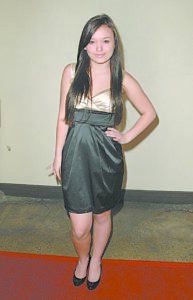 Constance Owl, an EBCI tribal member living in Murphy, got the opportunity to walk her first red carpet in Hollywood, California on Sunday, April 11 at the annual Young Actor’s Award ceremony held at The Beverly Grand hotel in Studio City.

She received a $2000.00 scholarship from Laurel Springs Distance Learning School and an exciting weekend among Hollywood’s outstanding child talent.  Owl received her scholarship and award recognition for winning a national essay competition on the under-representation of Native American talent in the film industry.

Constance is currently in final call backs for a role in a national tour of the Sound of Music. She is represented by JPervis Talent in Atlanta and the Osbrink Agency in Los Angeles.