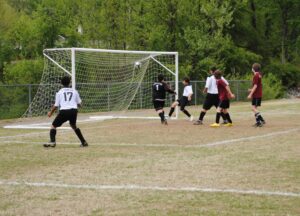 With the heat index approaching 90 degrees and conditions more perfectly suited to a firestorm than a goal storm on Saturday, May 1, Owen battled the Cherokee Flames to a 2-2 tie at the Buncombe County Sports Park in Asheville.

Despite unbearably humid weather, and intense physical play, Cherokee mounted numerous rushes in the first half against the Owen goal, coming away with only two goals on 12 opportunities.

Leading the offensive attack for the Flames were forwards Darius Thompson and Jeremy “Scrappy” Parker who had one goal apiece.

The formidable Owen front line put intense pressure on Cherokee’s defense in the first half, but only managed one score. Solid defensive play from both squads in the second half kept the score 2-1, until the 50th minute, when an Owen forward lofted a prayer from mid-field that floated into the back of the Cherokee net.

With a minute left in the game and the scored knotted at two, Cherokee ferociously attacked. Scrappy, off a perfect center from Russell Bigmeat, crashed on the Owen goal, only to be fouled, giving Cherokee a penalty kick and an opportunity to go home with the win. But, it was not to be, as the Owen keeper turned the Cherokee shot away and effectively closed the game.

Not even a torrential downpour could extinguish the Flames on Saturday, April 24, in their game against Roberson. The Flames came out smoking from the opening whistle and remained hot until rain and lightning forced the referee to halt the game in the middle of the second half.

The Flames first half offense relentlessly hammered the Roberson defense, allowing forwards Jeremy “Scrappy” Parker to notch a goal and Russell Bigmeat to add another.

Not to be discounted, though, Roberson’s offensive front mounted multiple first half rushes on the Cherokee goal, only to be turned away, time and again, by outstanding play from goalie Kenzie Garcia and defenders Chayton Thompson and Wade Wolfe.

In the rain-shortened second half, Roberson continued the offensive pressure and finally managed to coax a goal out of the Cherokee defense. With rain beginning to fall, the Flames then ignited for their final offensive attack that would see Scrappy adding one last goal for the day.