At 4:09 p.m. on Thursday, Sept. 9, Dr. Hartwell Francis held a smile so strong that a mask had no chance to conceal. 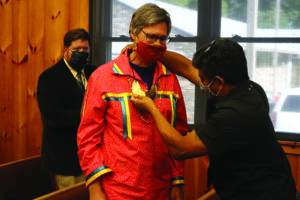 Bo Lossiah, right, Cherokee Speakers Council secretary, places a Cherokee gorget around the neck of Dr. Hartwell Francis who received the designation of Honorary Member of the Eastern Band of Cherokee Indians on the afternoon of Thursday, Sept. 9. (JONAH LOSSIAH/One Feather photos)

Just before the vote, Dr. Francis addressed Tribal Council fully in the Cherokee language. After finishing, he received an applause from the entire chamber.

Once everyone said their piece, Tribal Council Chairperson Adam Wachacha asked any Tribal Council member who wished to vote yes for this resolution to stand. Swiftly, 12 Council seats emptied.

“It’s an overwhelming honor to be given the opportunity to work with the language. This is just extra special to be made an honorary member of the Eastern Band of Cherokee Indians,” said Dr. Francis.

He did not have a history with Cherokee before moving to the mountains of North Carolina. He said that it all began with taking a job.

“I started in 2006 at Western Carolina University, basically without knowing anything about the culture or the people or the language. The state of the art was so limited that I was able to get the job at Western. I never looked back, but I’m just so happy that I got the job there,” said Dr. Francis.

Following a decade getting to know the speakers and working with almost every language program in Cherokee, Dr. Francis moved to work full-time with the EBCI in 2016.

“It’s special. I’ve made great friends here, with the speakers especially. The speakers have been very welcoming and shared their language. It’s been an honor to work with them and give them the opportunity to share their language the way they want to share it.”

Among those, Dr. Francis often found himself in the office of Bo Lossiah, secretary of the Cherokee Speakers Council. Lossiah was one of the members of the Speakers Council that spoke in front of Council.

“Any time you ask for a recording if you have a parent or grandparent that speaks, if they spent time with him, he has it. He presents it to you in a timely manner, and he’s taken the time to make sure that those recordings are there for the integrity. So that we know how it’s spoken from here to here on out. For all time. It’s for everyone. He’s done work for Dora Reed. He’s done work for Cherokee Choices. He’s gone down to the Snowbird library, and he does that without any hesitation. I can say he’s visited homes…he goes anywhere he needs to be.” 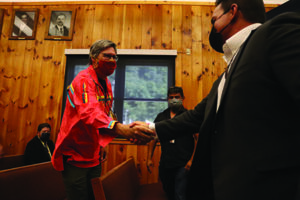 Lossiah said that it is difficult to explain all that Dr. Francis has done over the last 15 years. He said that one of the major assets that he brings is his ability to research. Part of that means working with other Tribes and ensuring that the EBCI stays up to speed.

“I can just keep going on all the work that Dr. Francis has done, and all he’s done with the Cherokee speakers as far as helping us develop language materials. Recording, I can’t say that enough. We’re never going to have the opportunity to listen to the people that we have now.”

Beloved Woman Myrtle Driver Johnson also made sure to add her perspective on Dr. Francis.

“I’ve never seen anyone that works as hard as Hartwell does. When he first came to us, I named him White Rabbit. I think that’s stuck with him. He works. I never see him slow down. He just works all the time. And you heard for yourself how well he’s learning to speak the language. A lot of Cherokees could sit back and take notes on how well he’s learning the language. We’re very fortunate to have someone like Dr. Hartwell Francis helping us to preserve the language. And when he makes me mad and I scold him, he just laughs at me,” said Johnson.

She has worked closely with him for years and says that he has only continued to develop respect from her.

“If anyone deserves the honorary place with the Eastern Band of Cherokees, Hartwell Francis does.”

JC Wachacha was another elder and member of the Speakers Council who offered his words. He said that Dr. Francis knows the Cherokee way. He also spoke about when he first started working with elders in Cherokee. Wachacha, like others, took their time to trust him.

“I had to learn to like him, you know? When I first met him. He kind of throwed me off guard there for a while. But, he’s a good one. I just came up here to give him my support,” said Wachacha.

Dr. Francis said that over the years he has learned how to roll with this, and that earning the respect from elders like Wachacha and Johnson is a true honor.

“That’s also very special. It takes some effort but it’s worth the effort to work with people who initially wonder why you’re there. And plenty of people have wondered why I’m here. I’m here because the language is so beautiful. I love the language and it’s a great object of study on its own,” said Francis.

As the unanimous vote came in, the honorary Cherokee stood slightly stunned. Lossiah placed a golden gorget over his head and Dr, Francis turned to a room with all eyes on him. It was time for a long line of handshakes and hugs. An honor he never expected to receive, but one that brought together everyone in the Council House.