After 27 years and a few too many cramped meetings, the Hiwassee Dam Volunteer Fire Department opened the doors to a new facility in Cherokee County over the weekend.

Fire Chief Chad McNabb said that this move is a huge boon to the department, and it comes at a great time for his team. 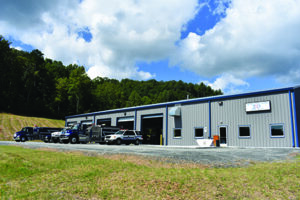 After 27 years and a few too many cramped meetings, the Hiwassee Dam Volunteer Fire Department opened the doors to a new facility in Cherokee County over the weekend. (Photo courtesy of Hiwassee Dam Fire Dept.)

“With everything that’s going on and still having to work a full-time job and trying to do all the phone calls and visits and everything that has to be done to get this station built, it’s like I’ve had about 100 pounds of weight taken off of me. So, it’s nice. It’s a relief,” said McNabb.

The station is named after TL McNabb, a retired member of the Fire Department. He was a charter member, former fire chief, assistant chief, and was on the board of directors. He served with the unit from 1974 to 2019.

“He was there. He was totally caught off guard from it. We surprised him really good with it,” said McNabb.

Hiwassee Dam Fire is made up of 45 volunteer firefighters. There are no paid positions on staff, and the entire department operates on $250,000 a year. McNabb says that they had simply outgrown the old station, which rests about 200 yards from the new building.

“The primary thing is now we have all of our equipment actually inside. We’ve been storing trucks and trailers in people’s yards and the parking lot at the station. Out in the heat, out in the rain, out in the weather. For the first time in a long time, everything we own is in a locked building and dry,” said McNabb.

“Every farmer in our district has probably held a piece of our equipment under a barn at one time or another. So, those days are over hopefully. We appreciate their help but I’m hoping that we never have to do that again.”

The new facility has a price tag of $860,000. McNabb said that the initial payment was accrued through the fire tax in Cherokee County.

He said that while they weren’t trying to build anything overly ornate, the new station is a significant upgrade in almost every measure.

Six offices are a lot better than one. The new facility also has three bathrooms compared to the one they had before. The building has areas for sleeping and a kitchen, so it could be used as a shelter in case of emergency. It could also hold a paid member of staff if the department was able to get to that position.

The old station will still be useful to the department, as they still own that property. McNabb said that it will be used for any additional storage and a place to maintenance their fire trucks.

He said that this was a big step that takes care of both the firefighters and the Hiwassee Dam community. Now, he is looking at a similar project in his rural area of coverage. He said that the isolated community of Violet needs attention.

“We are possibly going to build another station in a very remote part of our district. We’re working with that community and there are still a few bridges to cross, but that is probably going to be the next big project. It won’t be anything near the size of what we just opened. It’ll just be a very small station to hold two trucks and that’ll be it. It won’t have a meeting room or office; it’ll be a truck garage basically. But it will give us a presence in a neglected community,” said McNabb.

Until then, the fire chief said that he and his department will take every win they can.

“We’re extremely proud of it and we hope the new don’t wear off of it for a while.”