The Cherokee Braves (2-1) dominated a home game at Ray Kinsland Stadium against the North Georgia Falcons (1-2) on the evening of Friday, Sept. 3.  Cherokee had 313 yards of total offense and held the Falcons to only 26 which included -26 rushing due to quarterback sacks.

Cherokee had 16 first downs to North Georgia’s 4, and the Falcons turned the ball over three times including 1 fumble and 2 interceptions. 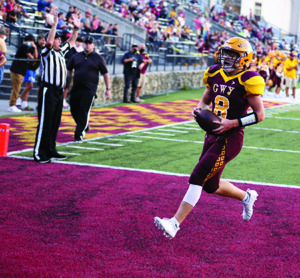 Cherokee’s Chase Calhoun, Braves sophomore running back, runs in for a touchdown in the first half of the Braves’ game against North Georgia at Ray Kinsland Stadium on the evening of Friday, Sept. 3. On the night, he was rushed 8 times for 118 yards and 3 TDs. (SCOTT MCKIE B.P./One Feather photo)

The Cherokee One Feather co-Players of the Game, as selected by the 104.1 FM broadcast team, were Don Bradley, senior quarterback, and Chase Calhoun, sophomore running back.  Bradley was 2 of 4 for 19 yards and rushed the ball 7 times for 62 yards and 1 TD, and Calhoun rushed 8 times for 118 yards and 3 TDs.  Bradley also had one of the interceptions in the game along with Raymond Bradley, sophomore.  Elijah Watty, senior, had the fumble recovery for the Braves.

To view or purchase photos from this game, visit: vs North Georgia, September 3 – Cherokee One Feather (smugmug.com)

All of the scoring in the game was done in the first half with the Braves scoring 21 points in both the first and second quarters.  Calhoun got things going with a 7-yard run just three minutes into the game.  Mato Grant hit the extra point to give Cherokee an early 7-0 lead.

Watty ran in from one yard out at the 4:43 mark of the first followed by a 33-yard touchdown run by Calhoun just 9 seconds before the end of the quarter to give the Braves a 21-0 lead after one.

Don Bradley ran 22 yards for this score at the 7:43 mark of the second.  Following Watty’s fumble recovery, the Braves took over and Watty ran in from one yard out again for his second of the day to give the Braves a 34-0 lead.

Cherokee’s defense continued to play hard during the quarter.  Luke Climbingbear, Braves sophomore, and Luke Smith, freshman, both had big sacks on the Falcon’s next possession to give Cherokee good field position again.

Calhoun rounded out the game’s scoring with a 19-yard run with 5:11 before the half.  Cherokee converted the two-point conversion to make it 42-0 which is how the game would end.

The North Carolina High School Athletic Association mercy rule kicked in at the start of the third quarter, and the clock ran continuously for the entire second half.

The Braves next game vs. Rosman for Friday, Sept. 10 has been cancelled per Cherokee Central Schools Athletics.  Watch the One Feather Facebook page for announcements on a possible replacement game for that date.